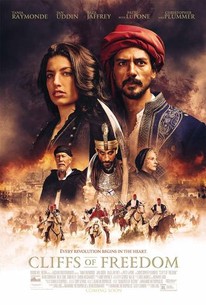 "Cliffs of Freedom" is the story of an ill-fated romance between a young Greek village girl and a conflicted Turkish officer during the dawn of the Greek War for Independence against the Ottoman Empire in 1821. Twenty-year-old Anna Christina is smitten by Colonel Tariq, a rising star in the Turkish army who has growing doubts about his countrymen's brutal methods of governance, and who had once spared her life on a cliff-top when she was a child... but their budding romance brings tragedy to her family and her village. Swearing revenge against the Turks, Christina joins the Greek rebellion and inadvertently becomes a local symbol of the Greek resistance movement, inspiring her countrymen and attracting the ire of the Turks, who place a bounty on her head. Having believed that she could leave her feelings behind, Christina must face off against the man who still loves her and wants to keep her safe, but who has now been tasked with her capture. Their encounters and skirmishes inevitably lead to a tragic confrontation during a pivotal battle between the Greeks and Turks that will change the course of history.

Critic Reviews for Cliffs of Freedom

The dialogue is often stiff, the action and plotting unlikely, making the romance hard to swallow.

Audience Reviews for Cliffs of Freedom

There are no featured audience reviews yet. Click the link below to see what others say about Cliffs of Freedom!