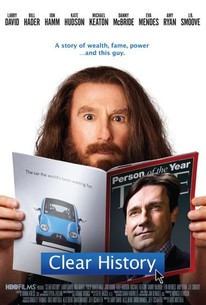 Critics Consensus: Its semi-improvised structure finds Larry David squarely in his wheelhouse, but with few laughs and a muddled message, it doesn't live up to his usual standards.

Critics Consensus: Its semi-improvised structure finds Larry David squarely in his wheelhouse, but with few laughs and a muddled message, it doesn't live up to his usual standards.

Critic Consensus: Its semi-improvised structure finds Larry David squarely in his wheelhouse, but with few laughs and a muddled message, it doesn't live up to his usual standards.

A marketing executive at an electric-car start-up quits after an argument with his boss, but is crushed when the company hits the big time, so he tries to reinvent his life under a different name in the peace and quiet of Martha's Vineyard. ~ Joe Friedrich, Rovi

Jon Hamm
as Will Haney

JB Smoove
as Jaspar
View All

The high points - especially a brilliantly worked running gag about soft-rockers Chicago - are spread too thinly, and David's improvised comedy of embarrassment is now very familiar.

It will take only a few minutes of Clear History... not only to "forgive" David for repeating himself but to thank him for reminding us why we miss Curb Your Enthusiasm and hope it comes back soon.

[It] has a nice, confident and well-edited breeze to it (including a lot of jokes about the band Chicago), with a fun cast that includes standout riffs from Michael Keaton, Danny McBride and Eva Mendes.

A wonderfully diverting film with Mr. David at his abrasive best.

If you're a fan of Curb Your Enthusiasm, think of this as an extended version of Curb. If you're not, History will not convert you.

Clear History was improvised from 35 pages of script. "You are such an a---!" one Vineyard resident tells Flomm, which is the movie's main revelation.

It's safe to say, you're bound to enjoy the results. Clear History, for Larry David, is another clear winner.

Larry David and I have a strange relationship...I totally find his stuff funny but so cringeworthy that I always end up running away from the TV when things get too awkward, and then back again because I want to know what happens.

The plot seems an excuse for the David character to wreak havoc on ordinary people and investigate how the social dynamic works when all involved no longer have blankets of privilege to overshadow their trivial concerns.

The revenge plot brings the characters together...and doesn't come together as satisfyingly as your average "Curb" episode... [but] the funny parts of "Clear History" are good enough to act as an acceptable 100-minute substitute.

For those of us who agree with Mel Brooks that "there's something about this middle-aged bald guy that's thrilling," his new film is a high-spirited treat - and a hint at the possibilities that await him if and when he finally calls it a day on 'Curb.'

Because HBO will basically let him do whatever he wants, Larry David passed up making another season of Curb Your Enthusiasm to instead write and star in this semi-improvised feature that has an A-list cast and C-list material.

It's very difficult for me to understand the motivation for Larry David to write and star in this HBO original film. More than anything, this film probably exists because David wanted to do something bigger and more lascivious than his television series, but if you've seen the show than this is more of the same. The premise sounds appealing, but the actual film is just weird. Its plot roves where it pleases with very little care, and there's really no point in the end. The show "Curb Your Enthusiasm" always wrapped up all its incidentals and had a point at the end of every episode. A lot of the film is improvised, like in the show, but without the show's cast of familiar characters this film is just random people being angered by Rolly's (David) antics, and that's not satisfying. There may be forgiveness from fans of the show, who want to see more of the same, but for outsiders this is a strange and unpleasant mess.

After Larry David said Curb Your Enthusiasm would be on hiatus so he could gather more material for his show, most people who are fans, like me, couldn't wait for this small reprieve to keep us on our toes and at least thinking of the comedy style he brings while we wait. This movie is an extended, if not a tad outrageous, version of that very show. Same deadpan humor. Same cringe-worthy and blunt situations. Unfortunately, what makes the show great is it stays within real world environments. The movie tends to break that with the invention of a new electric car and a pretty silly plot to exact revenge. It has all the twists and turns of the show, I just didn't buy it because none of it was based off anything real. That knocks it down two full stars for me. The jokes and acting, though, really keep this watchable for the fan of Larry David. It's a nice twist to see actors who are usually in roles more serious (especially Jon Hamm) break out of their shell and throw some dark comedy into it. The car scene between Kate Hudson and Larry David really wowed me for how violent Hudson gets. Great contrast to her usual stuff. Michael Keaton was pretty absurd, but he and his crony Bill Hader were supposed to be the absurdity of the movie. You could easily see the best conversations (whether improvised or not) were with JB Smoove and David. Unfortunately, Danny McBride wasn't himself we've come to expect at all. It will make you uneasy. It will make you scrunch up your face, but with a smile on it. I'd rather see more of the TV show.

This comedy was written by Larry David, Alec Berg, David Mandel and Jeff Schaffer, and directed by Greg Mottola. If you are fan of Larry David's comedy style you will enjoy the story of Nathan Flomm, who, in order to avoid the humiliation of having missed out on a hugely successful business, assumes a new identity on Martha's Vineyard. Of course, when an opportunity shows up, he plots revenge - his former business partner moves to the same town, and he starts moving and shanking... I am not sure that people who are not fans will enjoy this as much, though. Don't get me wrong, starring Larry David, Bill Hader, Philip Baker Hall, Jon Hamm, Kate Hudson, Michael Keaton, Danny McBride, Eva Mendes, Amy Ryan and J. B. Smoove, you cannot go wrong - but even they could not make the B grade screenplay working all the time. Michael Keaton, Danny McBride and Eva Mendes were outstanding and I really wished that the screenplay was up to their standard. It was funny, but only occasionally, and there was nothing I could mark as memorable! With its seaside setting and very light entertainment it is perfect for a relaxed evening, because it is still pleasant, late-summer themed mix, enjoyed to the sounds of Chicago... of, I almost forgot, and I really loved the debate about whether there is a racial preference between black and white dwarves. I wish that there was less restrain, but this was made for HBO, and obviously it was impossible to let Larry David loose (with a reason)!

After falling out with his business partner, Nathan (David) takes back his 10% stake in an electric car company. The "Howard", the model of car whose name led to the falling out between Nathan and Will (Hamm), goes on to become the biggest selling car in America. Having lost out on millions, Nathan becomes a figure of national ridicule and, after losing his wife and house, decides to change his identity and heads to Martha's Vineyard to begin a new life. Ten years later, Nathan is finally content, until Will arrives in town with his young wife (Hudson). I came round to the charms of Larry David late, having never been convinced by the 'Seinfeld' phenomenon. His mediocre 1998 comedy 'Sour Grapes' certainly didn't win me over either. Then, in 2000, came 'Curb Your Enthusiasm'. I ignored the show in its first season, turned off by the harsh video aesthetic (ah, the old days when TV shows didn't resemble wedding videos). When I eventually managed to convince myself to sit through a full episode, I was instantly hooked and 'Curb' quickly became my favorite show of the 21st century. Since the end of the show's eight season back in 2011, David fans have been waiting impatiently for more material. So arrives 'Clear History'. Along with David, the script was written by Alec Berg, David Mandel and Jeff Schaffer. The latter trio are responsible for such comedy misfires as 'The Dictator', 'Bruno' and 'Eurotrip', but, in its comic tone, this is very much a David production. Essentially, David has taken the premise of 'Sour Grapes' and tweaked it slightly so it resembles a feature length episode of 'Curb', albeit a somewhat weaker one. The character of Nathan is really just David's 'Curb' persona, while JB Smoove may as well be playing Leon, his much loved comic creation from the show. One of the strengths of 'Curb' is that it's a sit-com that places as much importance on the situation as the comedy. Structurally, it's in a class of its own, weaving enough sub-plots into a single episode to fill an entire season of a lesser show. A plot point will be introduced early on, only for you to forget it until BAM!, David springs it back on you for a final twist at the episode's conclusion. He employs this technique for 'Clear History', although the extended running time means sub-plots are referred back to a little more than they need to be (a running joke involving the rock group 'Chicago' runs its course halfway through the film but keeps cropping up, right until the film's climax). While structurally, the film can't compare to 'Curb', and doesn't have its great cast of supporting characters, it possesses enough laugh-out-loud moments to satisfy fans of David. It's great to have him back on our screens but what annoys me, and I suspect all 'Curb' fans, is that an entire season of the show could probably have been put out in the same amount of time David spent making a feature length TV movie. Still, I'll take what David I can get and, while 'Clear History' isn't great David, it is pretty good David. Pretty, pretty, pretty good.