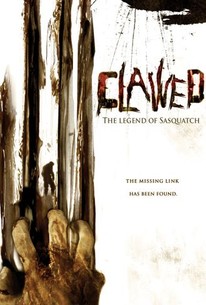 In the tradition of such drive-in classics as Demonwarp and The Legend of Boggy Creek comes the grisly supernatural horror opus Clawed: The Legend of Sasquatch. Jack Conley, Miles O'Keefe, Michael Bailey Smith and Brandon Henschel star in this story of Pine Creek, a town where generations have felt themselves robbed of hope - and glancing nervously over one shoulder - since the infamous Echo Mountain Massacre, a black mark on the town's history, wherein a group of local hunters were mercilessly butchered by a massive, hairy beast comparable to the ancient Indian tales of the Yeti. Many come to doubt the story, and even attempt to dismiss it in their minds as a grizzly bear attack - until the creature resurfaces in the flesh and, refusing to be brushed aside, begins a new rampage that carries the town into a waking nightmare. Now, a pack of thrill-hungry, heat-packing high school students and vengeance-obsessed hunters set out in search of the creature, to bring it home on a slab once and for all.

Don Brady
as Poacher No. 2

Maureen Hawkins
as Townsperson No. 2

Art Hickman
as Poacher No. 3

Hunor Tasnadi
as Townsperson No. 1
View All

Critic Reviews for Clawed: The Legend of Sasquatch

There are no critic reviews yet for Clawed: The Legend of Sasquatch. Keep checking Rotten Tomatoes for updates!

Audience Reviews for Clawed: The Legend of Sasquatch

You know...I remember looking at this movie at a store once, thinking how cool it looked and how awesome the story sounded. I finally got to watch it thanks to Chiller, and it wasn't as good as I thought it would be. There's very little entertainment here. And where in the world is bigfoot in this movie? It literally doesn't show him at all in the movie until the last 10 minutes. But I did find it a little suspesful and interesting, just a little.

A little bit better then I thought it be but not really.Seemed to be a combination of a Sci Fi Channel flick & an episode of Goosebumps but with blood

Clawed: The Legend of Sasquatch Quotes