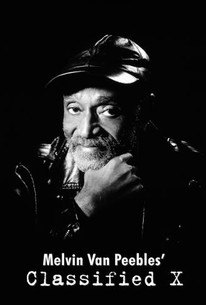 In this medium-length (53 minutes) French-U.S. documentary made for European television, black filmmaker Melvin Van Peebles examines African-American film history. Narrating while clips, stills, and location shots are seen behind him in a rear projection, Van Peebles' commentary covers a wide range of racial stereotyping. Beginning with early silent films, even prior to Birth of a Nation, excerpts from more than 70 features are unspooled. At one juncture, Van Peebles departs from mainstream Hollywood films to examine the independent black cinema, made for exhibition in the network of blacks-only theaters. When Van Peebles' self-produced his innovative and potent Sweet Sweetback's Baadasssss Song (1971), the film was a milestone. Embraced by the Black Panthers, it grossed $10 million in the U.S., grabbing the attention of the film industry -- which then used it as a springboard to distort Van Peebles' themes into the more violent "blaxploitation" genre of the '70s. Made in video and transferred to 35mm, this documentary was shown at the 1998 Sundance Film Festival.

Classified X explicitly asks the white viewer to look at Hollywood's race politics from the other side.

There are no featured reviews for Classified X at this time.