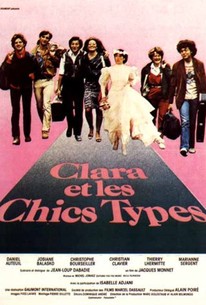 The thin plot that ties the story of Clara (Isabelle Adjani) and Bertrand (Thierry Lhermitte), the man pursuing her, to a newly-formed rock band is fleshed out by the young actors, several of them cafe-theater players making a transition to the "big screen." The actors play six young "twenty-somethings" in Grenoble who decide to make a go of otherwise routine lives by forming a rock band called the "Why Notes." The story opens with their trip to Paris for the weekend and closes with their coming home. In between, Bertrand is after Clara who has just abandoned her husband of a few hours. In the end, what happens "in between" may not be as relevant as the way in which the characters live, speak, and act.

There are no critic reviews yet for Clara et les Chics Types. Keep checking Rotten Tomatoes for updates!

There are no featured reviews for Clara et les Chics Types at this time.