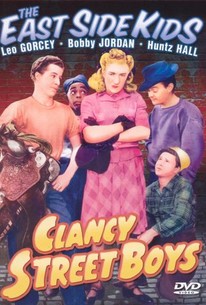 The East Side Kids -- including Leo Gorcey, Bobby Jordan, and Huntz Hall -- are causing trouble again (no great surprise there) in this frantic comedy. Muggs (Gorcey) gets the word that his rich uncle Pete (Noah Beery) is coming to pay a visit. However, this is bad news for Muggs's mom (Martha Wentworth) -- after the loss of her husband, Pete offered to help her financially, and in order to get a few more bucks out of the deal, she told Pete that she had seven children. Suddenly, the rest of the guys are forced to pose as Muggs' new "siblings," with Glimpy (Hall) getting the very short end of the stick as he impersonates Muggs' less-than-attractive sister. The ruse actually works at first, until local gangster George Mooney (Rick Vallin) threatens to tell Pete the truth, and then involves him in a kidnapping.

Jack Normand
as Goon
View All

There are no critic reviews yet for Clancy Street Boys. Keep checking Rotten Tomatoes for updates!

There are no featured reviews for Clancy Street Boys at this time.