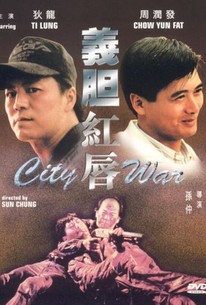 This Hong Kong crime thriller stars Chow Yun-Fat and Ti Lung as two cops who must hunt down Chu, a crime boss who has just been released from prison and is out for revenge against the mismatched partners. It's difficult to determine exactly who is chasing whom as Chu makes an attempt on the family of one of the partners. Although the story is standard buddy-cop fare in the mode of the American film Lethal Weapon and all of its clones, the action sequences and acting are solid, with performances from Yun-Fat and Lung, both veterans of the Hong Kong action genre.

There are no critic reviews yet for City War. Keep checking Rotten Tomatoes for updates!

There are no featured reviews for City War at this time.