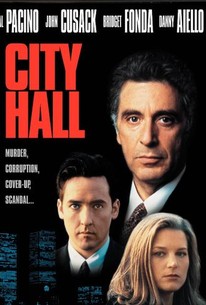 This tragic drama explores the rotten core of Big Apple city politics. The city's naïve, idealistic deputy mayor and his more flamboyant boss attempt to unravel a complicated tangle of lies, corruption and bureaucracy after a confrontation between a drug dealer and an off-duty narcotics cop goes horribly awry leaving three people dead, one of them a six-year old African-American child. The city residents are outraged and vehemently protest the police actions while the city fathers scramble to protect their political careers.

Harry Bugin
as Morty the Waiter

Edward I. Koch
as Newscaster

Director Harold Becker captures the political rhythms of the big city and keeps the rather complicated plot comprehensible. But audiences need to pay attention; this is not a by-the-numbers urban thriller.

Its chief pleasure is the acting of the big cast, notably Pacino. At 55, he has a haggard, life-wrestling beauty and a street eloquence that has more innocence than De Niro and more sincerity than Nicholson.

Many of the parts of City Hall are so good that the whole should add up to more, but it doesn't.

A watchable but never pulsating portrait of mayoral wheeling-dealing.

An ambitious but unsatisfying meditation on the morality of power.

Has all the ingredients for a solid drama but instead comes out a half-baked disappointment.

Convincing drama about the moral ambiguity of contemporary politics.

Not terrible...just not that good. I enjoy the portrait of New York City that City Hall creates, but this film really just drags towards its second half. It also has a lot of pointless scenes, and a telegraphed plot twist that makes no sense.

I have to say, I do like my political thrillers like the next person, but human interest and direct emotional connection must always be the primary concern of a movie, i my opinion. This one is just a mess and a confused and entangled heap of intrigue and chess, with no room for the characters to breath and spread the human energy. A stale and dry offering which never clicks, despite the good cast.

The acting is fairly good all around in this solid suspense film, but the script is a little too uninvolving to rise above a level of mediocrity. Pacino is superb, of course, performing with a range of emotions most actors can only dream of.