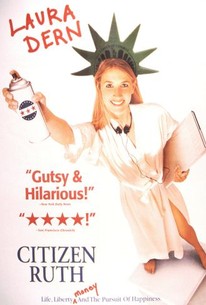 Critics Consensus: Smart and sharply funny, Citizen Ruth is an entertaining look at a tough subject -- and an impressive calling card for debuting director/co-writer Alexander Payne.

Critics Consensus: Smart and sharply funny, Citizen Ruth is an entertaining look at a tough subject -- and an impressive calling card for debuting director/co-writer Alexander Payne.

Critic Consensus: Smart and sharply funny, Citizen Ruth is an entertaining look at a tough subject -- and an impressive calling card for debuting director/co-writer Alexander Payne.

The divisive issue of abortion is at the center of Citizen Ruth, a political satire that attempts to subject both pro-choice and pro-life forces to equal ridicule. Laura Dern portrays Ruth Stoops, an irresponsible, unemployed woman who's addicted to inhaling household chemicals and has becomes pregnant, for the fifth time. After she is arrested for substance abuse, the judge offers to lessen her sentence if Ruth chooses to abort her child. Ruth agrees, but that night she encounters a group of pro-life activists. They take her under their wing, promising to help her, while secretly planning to make her case public as a symbol for the pro-life movement . When Ruth discovers the deception, she takes refuge with a pro-choice group, sparking a media frenzy. Yet Ruth soon finds her new friends are also only interested in her value as a media icon. Realizing she has been used as a pawn in the abortion rights battle, the apolitical Ruth turns the tables, offering to join whoever will give her the best deal. What results is a frantic, comedic session of wheeling-dealing which argues that activists on both sides have become more concerned with waging political warfare than helping women.

Kathleen Noone
as Nurse Pat

Will Jamieson
as Surveillance Guy

It's probably too schematic to reward more than a single viewing, but as a provocative one-time surprise it may become a specialized sleeper.

The movie is a gallery of sharp-edged satiric portraits.

The movie's most charming characteristic is, in fact, its irreverence: It bears the tell-tale signs of a young director taking aim at, and then laughing off, the absurdities of the world he grew up in.

Uncharacteristically of Payne, the film lacks a sharp point of view, unfloding as a series of gigs (some quite funny), trying to be too fair--for a satire--to both sides of the abortion issue.

Payne didn't hit his stride until Election, but this is a good film.

Payne's biting social satire about the abortion issue is shrewd and raucously entertaining. A smart and subversive comedy

Worst of all is Dern, who is so gratingly offensive that by the end of the movie you really just want her to shut up more than anything else.

An auspicious debut for director Payne that did more than hint at teh great things to come.

Bold drama about the dangers of zealotry.

There aren't to many comedies about abortion out there today, but Alexander Payne attempts on in Citizen Ruth. The movie has guts, but the humor itself doesn't have the shock value I was expecting. The witty Payne could've pulled a few jaw droppers, but didn't even attempt them. The movie still has funny moments, as Ruth is pulled between a poster child of pro-life and pro-choice, when she as a drug addict gets pregnant with her forth child. The espionage reveal was funny, but there aren't to many other laugh out loud moments. The film has some explorative cinematography, when put in the first person perspective of Ruth. It's nothing ground breaking, but is intriguing. I felt that Ruth switched from mellow disinterest to extreme passion to often. Perhaps it was to show the ever changing moves of an inhaler addict, but it didn't always make sense. Luara Dern has gotten acclaim for this role, but I didn't see anything special. Little true emotion, and far to much swaying.

One of the best political satires to deal with the extremely volatile subject of abortion, first time director Alexander Payne gave a powerhouse first film to his repertoire with this bitterly acid black comedy. What I think everyone appreciates is that both sides of this debate are shown in equally unpleasant terms, but not exactly unrealistic ones. The conservative branch are a set of violent and mean spirited protesters, but they also have women who regret their own abortions, and people who sincerely try to help the less fortunate. The liberal side is characterized as a set of lesbian leaning protestors and a freedom fighting mercenary who care about the right to choose. In the middle of this blood sport for the sake of creation is the character of Ruth (Dern), who doesn't care about the politics that make her center stage in a tumultuous feud. Instead of caring about the sanctity of human life, or about the freedom to choose, she cares about what is best for her. She makes the film enjoyable because she cares about very little except getting a lot of money and getting high behind a convenience store. It's really interesting how each side is fighting for her rights in their own way, trying to give her the freedom to choose and yet both leaning towards a different end-game, and yet she only wants to know what's best for herself. It's this selfish attitude that makes for the best moments, especially because there isn't any morale and certainly not any lessons learned from her experiences. Ruth is continually given the chance to do right, but every time she enables her formal bad behavior so she can get away clean. This film illustrates that human choice precedes morals, intellectual discussion, and politics, and that human choice is subjective based on who the person is. I think this film is good for anyone, on either side of the political spectrum, not for educational purposes, but because it works as a great character study as well as satire for its own sake.

This marked the feature debut of director and co-writer Alexander Payne, and man, did he get off to a good start. This is a scathing satire on the hot-button issue of abortion, and the ballsiest move that is made is that the film takes neither side, and instead skewers them both equally. Ruth is an unfit, drug addicted scumbag loser who, after finding out she's pregnant with her fifth child, finds herself unwittingly in the middle of the pro-life/pro-choice war as a hapless pawn who really wants nothing to do with either side, but is willing to play ball once she figures out that either side is willing to give her tons of cash if she joins in, The film is a tad rough, but makes for a striking debut. It's got nothing but unlikable characters, and takes the best position on an issue where neither side is truly right or truly wrong. The portrayals of the pro-choicers and the pro-lifers are dead on accurate, and that will probably make some people very uneasy. I think this is a bold film, and one that's also very sharp, funny, and entertaining, It does get a bit repetitive after a while, but overall, proves to be quite solid. Laura Dern is brilliant as Ruth, and this is easily her most courageous and strong performance. It takes talent to pull off such a tough character, but she absolutely nails it. Other actors such as Kurtwood Smith and Swoosie Kurtz turn in some good work as well, but seem far less well rounded, and veer more often than not towards caricature. It's still some nice work though. Payne obviously went on to far greater achievements, but this marked a great place for him to begin. Give it a go, it's quite something.

Number one its ballsy, I mean really a comedy about abortion is just not the type of film that is made too often. Number two, Laura Dern is one of the bet actors alive and here she is given a really great character. Ruth is a woman who really only cares about herself and she becomes the unwilling pawn in the ideological tug of war that ensues. As unlikeable as Ruth is at times, we really do feel for her and Laura Dern makes that happen. Alexander Payne ingeniously parodies both sides of the issue but it never leaves the realm of believability.