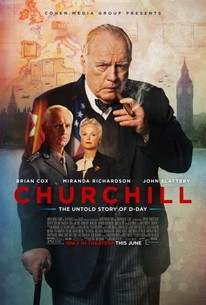 Critics Consensus: Churchill gets sterling work out of Brian Cox in the leading role, but it isn't enough to overcome a muddled and ultimately unsuccessful approach to an incredible real-life story.

Critics Consensus: Churchill gets sterling work out of Brian Cox in the leading role, but it isn't enough to overcome a muddled and ultimately unsuccessful approach to an incredible real-life story.

Critic Consensus: Churchill gets sterling work out of Brian Cox in the leading role, but it isn't enough to overcome a muddled and ultimately unsuccessful approach to an incredible real-life story.

Tensions mount for the beleaguered British Prime Minister Winston Churchill (Brian Cox) in the days leading up to infamous Allied D-Day landings in Normandy, France in June, 1944. Fearful of repeating his deadly mistakes from World War I in the Battle of Gallipoli, exhausted by years of war, plagued by depression and obsessed with his historical destiny, Churchill is reluctant to embark on the large-scale campaign, one that the entire war effort hinges upon. Clashing with his Allied political opponents U.S. General Dwight D. Eisenhower (John Slattery) and British Field Marshal Bernard Law Montgomery (Julian Wadham), the troubled Churchill receives support and devotion from his wife, the brilliant and unflappable Clementine Churchill (Miranda Richardson). With her strength and shrewdness, "Clemmie" halts Winston's physical, mental spiritual collapse and inspires him on to greatness.

For all its fanciful silliness, this is an interesting and original study of a magnificent but unsaintly man raging in the dark against the dying of the light.

As this drama begins... the British prime minister is silhouetted on the horizon, a hunched, rotund figure, with his black Homburg, overcoat and cane, giving perhaps the first sign that this film will take the iconic and turn it into cliché.

The conflicts rage on. The main one is between the Masterpiece Theatre staging and the subversive revision of history. It's Brian Cox's Churchill who brings them together.

When Cox finally announces "This is the Prime Minister speaking" as he delivers his D-Day address to a waiting nation, you understand the significance of those six words exactly - both what they mean, and what they need to mean in order to mean anything.

Cox gives a fascinating performance even if the film itself is on the lugubrious side.

Churchill creates, as did the man himself in his lifetime, the illusion of stability, even at the height of crisis. This alone is worth the price of admission.

But as noble as the intentions of this minor biopic may be, it struggles to overcome a strange goofiness that all too frequently peaks out from behind the drama.

Cox is well suited to playing this character (Churchill ) and though he is not the first, nor maybe the best, he does well to portray the iconic and beloved man.

They have failed miserably, squandering Cox's committed performance in the process.

It is an admirable aim but unfortunately the film falls far short of its goal.

The reason to see it is Brian Cox, who gained a substantial amount of weight and leans full bore into the role. Cox roars and blusters.

There are no featured audience reviews yet. Click the link below to see what others say about Churchill!