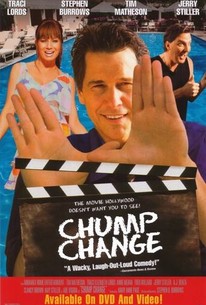 Actor and playwright Stephen Burrows makes his directorial debut with this independent comedy that takes a witty look at the downside of working in the movie business. Steve (Burrows) is a writer, actor, and comic who years ago left his hometown of Milwaukee, WI, for the bright lights of Hollywood and who, after years of struggling, has managed to get his foot in the door of show business thanks to his appearance in a widely seen commercial for a personal hygiene product called "Crotch Fresh." Steve decides to pay a visit to his friends in the Midwest, and while in Milwaukee he meets Sam (Traci Elizabeth Lords), an attractive woman interested in knowing more about his career in entertainment. As Steve and Sam get to know each other, he regales her with a number of remarkable stories about fascistic acting coaches, egocentric producers, and studio heads too young to hold a driver's license. Stephen Burrows was able to persuade a number of his well-known colleagues to appear in Chump Change, including Tim Matheson, Jerry Stiller, Anne Meara, Fred Willard, and Abe Vigoda.

Jerry Stiller
as The Colonel

Fred Willard
as Manager No. 3

Clancy Brown
as The Man

Abe Vigoda
as The Frog

Theo Greenly
as Chuckie Self
View All

a pale imitation of The Big Picture

Pursuing show-biz fame has never been depicted more hilariously than in 'Chump Change.'

There are no featured audience reviews yet. Click the link below to see what others say about Chump Change!