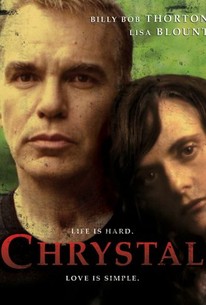 Actor Ray McKinnon (O Brother, Where Art Thou?) makes his debut behind the camera with Chrystal, a psychological drama written, directed, and produced by the long-time character player. The film stars Billy Bob Thornton as Joe, a man who returns home after a 16-year prison stint. Before his conviction, Joe was involved in a car wreck while being pursued by the authorities. Though he survived, Joe's wife Chrystal (Lisa Blount) suffered permanent injuries and the couple's young son was killed. While Joe seeks redemption, he must also contend with Snake (McKinnon), a drug dealer who is less than kind to the ex-con. Chrystal premiered at the 2004 Sundance Film Festival.

Ed Corbin
as Ned
View All

Chrystal unravels a bit toward the end as it becomes more fable-like, but the performances make it worthwhile.

Respectable piece of work is reasonably involving if not compelling.

It's meandering and uneven, but much of it is powerfully effective and affecting.

Even those impatient viewers who feel like they're watching paint dry will admit that the colors are beautiful.

A grand story of redemption, laced with barbecued wit and slopped with intrigue.

While some of the low-key atmospherics are effective, and Thornton suffers with exquisite quietude, some important scenes unfortunately are clumsily staged.

No slam against the O Brother ,Where Art Thou? soundtrack but Chrystal could give it a run for its money.

Looks and feels authentic in a way only a Southern director is likely to achieve.

An affecting melodrama that's deep-fried in Southern heritage right down to its ribs.

Moves at a virtually glacial pace, dramatizing its story less than entombing it...lacks the radiance it obviously aspires to.

Ray McKinnon's Chrystal is a real undiscovered gem. Starring McKinnon's now-deceased wife Lisa Blount and Billy Bob Thornton, Chrystal is a startlingly real story of pain and redemption set in the "wild" backwoods of Arkansas. With its powerful themes and emotional scars, fans of Sling Blade should appreciate this film equally. It is no caricature. I loved the setting, characters, and issues, but the pace was uneven, At times I thought this was a brilliant film, and at others I thought it ponderous. The film is also "wild" in many senses; it features picturesque scenery and savage yet eerily accurate characters. Lisa Blount is wonderful; I'd like to see more of her roles. McKinnon is gifted also; I have seen him play a wide variety of characters. Chrystal's bluegrass musical background is a great addition and even steals a few scenes. This is a traumatic journey, not for the prudish or squeamish. It represents outstanding independent filmmaking.

A really great movie. It starts out a little weird, like you don't know what you're getting yourself into, but it is definately worth it. You become really invested in the characters (especially the dog!)

This movie was so boring! It never picked up. Do not waste your time.