Chronicle of a Disappearance (1997) 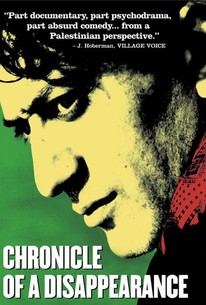 Deceptively simple and executed with a documentary feel, this drama represents a highly personal journey home for ex-patriot Palestinian filmmaker Elia Suleiman. The film is divided into two sections. The first documents the paradoxical but sleepy existence in the Arab part of Nazareth. The second part takes a more political view of the city and in it, Suleiman takes a more active role. He has come to his former home in search of inspiration, but what he sees are many disturbing images of Arab people trapped in a cultural identity crisis, a point best illustrated by the plight of a young Arab woman who wants more independence than traditionally allowed in her part of town but cannot find it because of prejudiced residents on the Jewish side.

Critic Reviews for Chronicle of a Disappearance

In its seemingly humble way, it's trying to build a truth that can be universally processed, and for that it continues to stand on its own.

The film's rambling, non-linear structure may turn some people off even more than its politics does.

There are no featured reviews for Chronicle of a Disappearance at this time.

Chronicle of a Disappearance Quotes