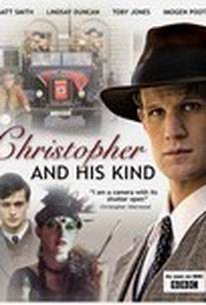 Critic Reviews for Christopher And His Kind

Audience Reviews for Christopher And His Kind

Christopher and his kind is a thoughtful film adaptation of the Isherwood memoir, filled with uncensored sexuality and grim atmosphere of the beginning of the Third Reich. The acting was simply marvelous, the editing was great. 90 minutes flies by extremely fast. It is funny at times but mostly saddening. It presented Berlin on both a personal level and a objective level, from the underground gay bar to the working class families, it is a good film to absorb some German culture and how Nazi came to power.

Production values could be better, but it is a good film. Interesting attempt to capture the zeitgeist of Nazi Germany and the place of gay men in that society.

As a young writer with one published novel to his name, Christopher Isherwood(Matt Smith) feels he should spread his wings in 1931. That's not mention wanting to get as far away from his domineering mother(Lindsay Duncan) as possible. He settles for Berlin, answering the invitation of his friend W.H. Auden(Pip Carter) and the promise of oodles and oodles of young men, including Caspar(Alexander Doetsch). Feeling that he will stay around for a while, despite the growing threat of the Nazis, Isherwood decides to start giving English lessons to pay the bills and to take up residence at a boarding house recommended to him by Hamilton(Toby Jones), who he met on the train, where Jean(Imogen Poots), a singer who was abandoned by a friend, also lives. "Christopher and His Kind" works on many levels, historical and personal, by showing very smartly and touchingly how the past informs the present and the future while definitely not shying away from the erotic elements of the story. Berlin of 1931 was a brief pocket of freedom to those from England, where homosexuality was illegal at the time, seeking either a first or a second chance. At the time, the communists were seen as a possible hope but after the war very much hated, but were not the same in any case. For Isherwood, it was a time to learn about the difference between sex and love while also getting a first class political education. And most encouragingly is Matt Smith working on a different frequency, proving that he can play normal for a change.

In interesting look into the life of Christopher Isherwood while he was living in Berlin just prior to and during the Nazi take over. One tends to forget just how progessive and free spirited (Pre-Hilter) Berlin was. To watch (from the inside) while the city slowly falls to Hitler and to feel the pain of the people (families and friends) that were torn apart is heartbreaking. There is a very telling scene between Christopher and the landlandy of the building he lives in. She is puzzled by why he wants to leave Berlin and when he explains that it is because of Hilter and the Nazi's. Her response is to give him a run down of several of the past regimes and basically says "Why would I leave? This is my home...you can get used to anything." Which (sadly) is the mentality that allowed Hiltler to get such a solid hold on Germany. But as frightening as it is to watch the Nazi's slowly permeate the entire country...you can not help but feel sick by the fact that the initial horrors of Nazi takeover are a mere slap in the face compared to the soul wrenching attrocities that were to follow. Though not exactly upbeat...you have to admire Isherwood for "a life well lived" and for sharing it all in his writing, for future generations to appreciate. learn from and especially to feel less alone.

Christopher And His Kind Quotes