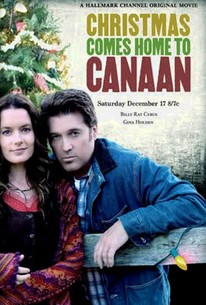 Widower Daniel Burton (Billy Ray Cyrus) bonds with his son's physical therapist (Gina Holden) during a stay in California. His son (Liam James), recognizing the potential love match, invites the woman to their hometown of Canaan, Texas, for the holidays, but Daniel's daughter (Emily Tennant) objects to the newcomer intruding on their family tradition. Sequel to 2009's Christmas in Canaan.

There are no critic reviews yet for Christmas Comes Home to Canaan. Keep checking Rotten Tomatoes for updates!

There are no featured audience reviews yet. Click the link below to see what others say about Christmas Comes Home to Canaan!