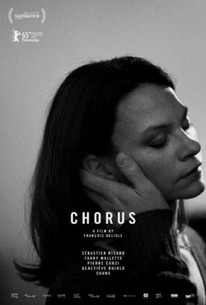 Hugo was eight when he went missing. When searches turn up nothing, his parents, Christophe and Irène split apart under the excruciating pressure of waiting. He moves to Mexico. She goes back to her career as an alto in an early music choir. They live in their separate solitudes, haunted by Hugo's disappearance, until one day they get the news that human remains have been found. Everything indicates they are those of their son Hugo. During their forced reunion in Montreal, they both handle the death of their child in their own way. Amid the guilt of losing a loved one, they haltingly move toward affirmation of life, acceptance of death and even the possibility of reconciliation. Chorus is a love story that emerges from mourning and leads to two survivors clinging to each other as if to heal the deepest cut of all.

A festering beauty of a film slowly reveals itself in this bleak but uplifting black-and-white study of grief from Quebeçois director François Delisle, an acutely aware portrait of a relationship after the unimaginable.

A gritty, emotionally honest (and draining) film about coming to grips with the horrors life can throw at you at any given moment.

It's a delicate balance. The mood is heavy and could easily tip to the side of melodrama, but Delisle keeps his cool by keeping emotional breakdowns to a minimum.

Observing a finely-wrought filigree of despair, "Chorus" is remarkably effective at making you feel something you already know to be true.

It's a long, dark road to that catharsis, but it's worth the journey to get there. I won't easily forget "Chorus" - its currents run too deep.

A strangely cold drama that doesn't leave us much room for emotional investment or for anything that we haven't felt before in superior films about loss, and it is hard to get past the intrusive voice-over and the characters' self-pity that sometimes borders on masochism.