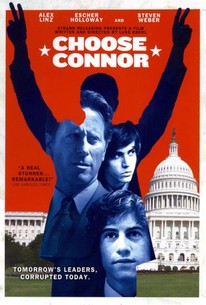 A politically savvy 15-year-old learns the true nature of politics after accepting the position of youth campaign spokesman for a determined congressman in the feature directorial debut of 20-year-old actor-turned-director Luke Eberl. When Congressman Lawrence Connor (Steven Weber) speaks before an assembly of high-school students during his run for the Senate, the enthusiastic and well-informed response that he gets from 15-year-old student Owen (Alex D. Linz) results in an invitation to join the campaign as Connor's youth spokesman. Subsequently exploited in a tireless campaign that includes television commercials, posters, radio advertisements, and speaking engagements, Owen is prompted by his growing distaste for the cut-throat world of politics to reconsider his career or risk losing his innocence.

Christopher May
as Heckler

Michael Welch
as Max
View All

It's a film that works through guilelessness and cynicism.

Luke Eberl's Choose Connor is a real stunner, an unusual coming-of-age story that packs a wallop in unexpected ways.

Whether or not one buys into pic's vision of government as irreversibly corrupt, the leap from the general to the specific registers as unconvincing at best.

Choose Connor, a jaundiced look at political power and moral turpitude, draws you in by creeping you out.

For reasons that are unclear, Choose Connor seems to both court relevance and avoid it, lapsing into allegory at inopportune moments.

An upstart thriller about a young man's initiation into politics and life, Choose Connor is not coincidentally getting a theatrical release during an election that will likely mark an old man's exit from both politics and life.

At numerous points, you suspect the low-budget project has been conceived and executed by middle-schoolers.

Touches on challenging topics like political expediency versus integrity. But with an abrupt detour into tabloid scandal, how can the movie demand integrity of politicians, when it similarly ends up lacking the courage of its own convictions.

The ending is also note-perfect. However...it could have used perhaps a bit more restraint in some areas.

I wouldn't say there's any big life lessons being told here, but the story of Owen Norris coming of age in the harsh light of reality is intriguing stuff.

There are no featured audience reviews yet. Click the link below to see what others say about Choose Connor!