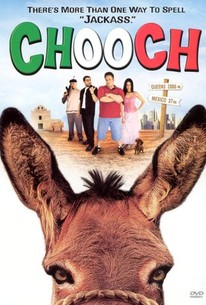 A guy eager to leave some bad luck behind unexpectedly walks into a series of disasters in this comedy. Dino Condito (Carmine Famiglietti) has been persona non grata in his neighborhood in Queens ever since he flubbed a crucial play that cost his softball team the league championship against Hoboken. Months later, Dino is still the butt of jokes and he's losing all confidence in himself, so his cousin, Jubilene (Joseph Summa), decides to help him out. Cashing in his savings, Jubilene surprises Dino with a vacation in Cancun, Mexico, that he's convinced will lift his spirits. Unfortunately, a luggage mix-up at an airport in Mexico makes Dino and Jubilene the target of a handful of local gangsters and corrupt soldiers. Soon, the guys are being chased from one end of the country to the other and end up in all kinds of trouble before word gets back to their "crew" in Queens that their buddies need to be rescued.

Chooch is really just an outline for a movie.

The sort of vanity project that gives amateurs a bad name.

It's an earnest affair that looks like a neighborhood project on film (16-mm, in fact, blown up to 35) for someone's anniversary or birthday party.

Devoid of Sopranos stereotypes, the film charms with its p.c. portrayal of Italian Americans, yet the depiction of Mexicans veers toward the offensive.

An absolute chore to sit through, unless you happen to come from the same block as the filmmakers, in which case you might produce a few charitable chuckles, just to be nice.

[A] contrived but pleasant enough comedy.

There are no featured audience reviews yet. Click the link below to see what others say about Chooch!