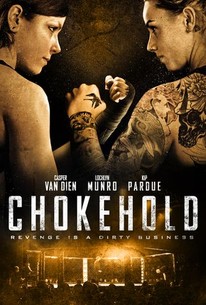 A young woman's story of redemption revenge and reconciliation in the gritty world of underground No Holds Barred MMA Fighting. After her Father's (Casper Van Dien Starship Troopers) murder Zoey abandons her training in Las Vegas with Uncle Ray (Kip Pardue Ray Donovan) to return home. However, her homecoming is far from joyful. She finds herself salvaging the family gym while searching for the killer all while trying to repair a relationship with her deceased father. The underground fighting world seems to be the only lead and the path she must take to fight for justice for her father. The film also stars Lochlyn Munro (Riverdale) and introducing Melissa Croden as Zoey.

Clumsily written and directed thriller that's a fine primer on what a "stage punch" looks like -- from people who are supposed to look as if they're actually landing blows.

There are no featured reviews for Chokehold at this time.