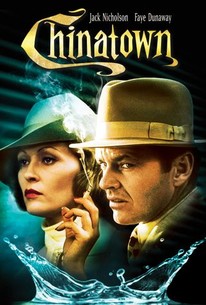 Critics Consensus: As bruised and cynical as the decade that produced it, this noir classic benefits from Robert Towne's brilliant screenplay, director Roman Polanski's steady hand, and wonderful performances from Jack Nicholson and Faye Dunaway.

Critics Consensus: As bruised and cynical as the decade that produced it, this noir classic benefits from Robert Towne's brilliant screenplay, director Roman Polanski's steady hand, and wonderful performances from Jack Nicholson and Faye Dunaway.

Critic Consensus: As bruised and cynical as the decade that produced it, this noir classic benefits from Robert Towne's brilliant screenplay, director Roman Polanski's steady hand, and wonderful performances from Jack Nicholson and Faye Dunaway.

A private detective, Jake Gittes, hired to investigate an adultery case, stumbles on the plot of a murder involving incest and the privatization of water through state and municipal corruption, land use and real estate. If he doesn't drop the case at once he faces threats of legal action, but he pursues it anyway, slowly uncovering a vast conspiracy.

Roman Polanski
as Man With Knife

Jim Burk
as Farmer in the Valley

Claudio Martinez
as Boy on Horseback

John Holland
as Farmers in the Valley

Jesse Vint
as Farmers in the Valley

Jim Burke
as Farmers in the Valley

Denny Arnold
as Farmers in the Valley
View All

In its total recapturing of a past, in its plot, its vivid characterizations, its carefully calculated and accelerating pace, its whole demonstration of a medium mastered, Chinatown reminds you again that motion pictures are larger, not smaller than life.

As much as I admire the work of both Polanski and Nicholson, I found Chinatown tedious from beginning to just before the end.

Polanski's telling of his tale of corruption in LA is masterly - thrilling, humorous and disturbing at the same time - and brilliantly played by John Huston and Faye Dunaway as well as Nicholson.

See this film as many times as you can. Please.

It was with Chinatown that Nicholson made the world sit up and notice: he's in every scene of this film and he fills the frame with that heady mixture of knowing charm and explosive energy.

[Polanski] handles the mechanics of the plot with a ruthless brilliance that is immediately involving.

Chinatown is one of the great films. Period.

Nicholson is terrific as Gittes, and Dunaway, as a troubled widow, gives the performance of her career.

Lauded for its brilliant structure and build-up to a - you guessed it - shocking finale that still leaves me jaw-dropped after countless repeat viewings.

Once you've seen it, Chinatown never leaves you. Like Jake, you can't forget it.

In the 1970's a bunch of American filmmakers and actors were given a bunch of money and told to just go away and make movies. And that they did. The consistent results led to the 70's arguably being the best decade in cinema that America has ever produced. We were gifted such classics as Taxi Driver, One Flew Over the Cuckoo's, Mean Streets, The Godfathers and Dog Day Afternoon. Chinatown is another of those films that can be considered a classic among this elite list and one of a few from this era of filmmaking that time has been most kind to. Plot: In 1937 Los Angeles, private detective JJ 'Jake' Gittes (Jack Nicholson) specialises in matrimonial/cheating spouse cases. When he is hired by Evelyn Mulwray who suspects her husband Hollis - a high-profile engineer - of having an affair, he gets on the case and produces photographs of him with a young girl. It soon transpires that Jake was hired by an impersonator and not the real Mrs. Mulwray (Faye Dunaway). When Hollis is found dead by drowning, Jake finds himself involved in a complex web of deceit involving murder, incest, and corruption that are all related to the city's water supply. Opening with Jerry Goldsmith's seductive and evocative noir score, Chinatown establishes it's mood from the very opening credit sequence and a perfect introduction of what to expect. Paying homage to the traditional gumshoe approach of Humphrey Bogart's Sam Spade and Philip Marlowe, Roman Polanski has a confident handle on Robert Towne's meticulously detailed screenplay. No sooner are we introduced to Private Investigator Jake Gittes as he surveys the sun-kissed lands of Los Angeles while applying the tricks of his trade to tail and investigate the latest of his infidelity cases. Like all good noir's, however, our doggedly determined P.I. soon stumbles onto something much bigger. In this case, the possibility of murder and the financial benefits of gentrification. As a result, Chinatown becomes a labyrinthine puzzle of a wider political spectrum that reaches far beyond anything expected and where nothing is quite as it seems. It's apparent from the offset that Chinatown is an impeccably crafted film with a measured pace and an attention to detail that has rarely been matched. There's so much on display that it's obvious that the entire cast and crew are operating at the top of their game; Richard Sylbert's production design perfectly captures the look and feel for 1930's L.A. and it's complimented greatly with John A. Alonzo's sumptuous cinematography. It's the twists and turns of Towne's Oscar winning script that impress the most, though. He keeps us at arms length for the majority of the film and never forces his hand a minute too soon. Nothing is rushed here as it marvels in patience. Even the title of the movie is elusive and doesn't fully make sense until the film is given time to play out. In the meantime, Towne and Polanski tease with smidgens of information peppered throughout the narrative. For the first time viewer this could be a slight challenge but Chinatown has grown in its stature over the years because it's has replay value. In fact, it demands it. This is not a film that can be appreciated in one sitting but if invested in, it all comes together masterfully. Even Jack Nicholson and his penchant for grandstanding is kept to a minimum. Nicholson keeps his usual histrionics at bay and although he displays flashes of his energetic approach to a character, his Jake Gittes is a far more reserved performance. Oscar nominated for his work, some still claim this to be Jack's best performance and it's not hard to see why. An elusive masterpiece of mystery and intrigue. The beauty of Chinatown's narrative lies in the deceitful lies told by it's characters. So much of the dialogue and interactions are not what they seem and it maintains a sense of secrecy and mistrust that the story and film thrive on. At one point, John Huston's callous and calculated Noah Cross says... "You may believe you know what you're dealing with but you don't" - this quote, in itself, sums up the film which also has a knock-out reveal that you, simply, don't see coming. It may be blasphemous to some (if not many) but my favourite of the sub-genre is still Curtis Hanson's L.A. Confidential. That said, Hanson's vision for that James Ellroy adaptation would, most likely, never have been possible had it not been for Chinatown leading the way in its style and composition. This is a timeless piece of cinema. Of course, the 1930's setting lends a hand but Chinatown hasn't aged in over 40 years which is a real testament to Polanski's approach to the material and the exemplary work by all involved. Mark Walker

An excellent screenplay and a willing crew are all up to task of peeling back the layers of a society not as innocent as it likes to pretend. Nicholson is a detective who accepts that there might be some corruption in the world but decides to limit the avalanche against his better judgment. And although released in the mid70s the idea expressed is that this crap has been going on for awhile. Required viewing for those who appreciate social commentary with their entertainment.

An extremely complex film noir full of mystery and intelligent twists that keep us always guessing and trying to put together the pieces of the puzzle, while its brilliant script is only matched by Polanski's excellent direction and Jack Nicholson's nuanced performance.

An excellent, classic film that is suspenseful, well-filmed, and features enjoyable twists and turns. Jack Nicholson is terrific--as usual.