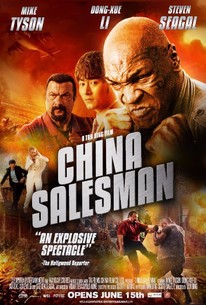 Based on a true story, CHINA SALESMAN is a film about the dangerous and epic adventure to Africa where a Chinese engineer/salesman comes face-to-face with a corrupt competitor over the contract for the first African mobile telecom technology. Local tribesman Kabbah (Mike Tyson) and mercenary Lauder (Steven Seagal) get drawn into the conflict in a classic, brutal hand-to-hand fight while the entire country faces civil war battles.

A tell-all chronicle about how this movie came into existence might be more compelling than the film itself, and require angry denials from authorities in response.

Hammy and painfully incompetent: yup, this is a film co-starring Steven Seagal.

If you can't tolerate stinky cheese, leave this one on the shelf.

China Salesman has got to be one of the most baffling, expensive pats on the back China has ever given itself.

It's never boring and there is always some batshit crazy stuff going on every second.

The single worst thing about China Salesman is how it doesn't even bother to hide its propagandistic intentions.

Ashley Naftule
Under the Radar

In short, China Salesman is a piece of s---; a massive, steaming turd that probably shouldn't exist, but does.

More interesting for what its production and creation says about the movie business today, than for anything that happens on screen

We can revel in China Salesman without shame, if we desire to be entertained. The term "guilty pleasure" reserves a none-too-secret snobbery.

A mess on every narrative and technical level...

If it were half an hour shorter, China Salesman might be a candidate for "so bad it's good (or at least kind of fun)" status.

There are no featured audience reviews yet. Click the link below to see what others say about China Salesman!