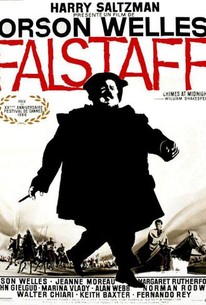 Critics Consensus: A classic story adapted by a filmmaker near his creative peak, Chimes at Midnight unites Welles and Shakespeare - and powerfully distills the best of both.

Critics Consensus: A classic story adapted by a filmmaker near his creative peak, Chimes at Midnight unites Welles and Shakespeare - and powerfully distills the best of both.

Critic Consensus: A classic story adapted by a filmmaker near his creative peak, Chimes at Midnight unites Welles and Shakespeare - and powerfully distills the best of both.

In this memorable adaptation of Shakespeare's Henry IV, Parts 1 and 2, the friendship between the rogue Falstaff and the wild Prince Hal is fated to end when the young man gives up his dissolute life and assumes the throne England after the death of his father, King Henry IV.

Ralph Richardson
as '''The Narrator''', Narrator

News & Interviews for Chimes at Midnight

On DVD This Week: The Jungle Book, Me Before You, and More
Five Favourite Films with James Franco

View All Chimes at Midnight News

Critic Reviews for Chimes at Midnight

Welles' vision and imagination is unmatched in film. His use of light in a forbidding, dark castle is a wonder.

Thanks to an astonishingly crisp restoration, Orson Welles' 1965 Shakespearean masterpiece can now be appreciated by anyone who thought his best days behind the camera ended with Touch of Evil.

Quite likely the greatest Shakespearean film ever.

See it on the big screen if you can; for all of its flaws it's a glory.

The best and most touchingly personal of all Shakespeare adaptations, Chimes At Midnight is pervaded by melancholy and loneliness, even though its characters are almost seen never alone.

Sprawling, and hugely ambitious, and containing a glorious Wellesian Falstaff who's as majestic in folly as he is in girth.

[Chimes at Midnight] is a curiously mixed bag of a film in which defects often become virtues and difficult attempts succeed while easy ones fail.

Chimes at Midnight is a unique achievement that few filmmakers have ever equaled.

In this film, [Orson] Welles is bigger than life, literally and figuratively.

One can feel Welles' energy and passion, but there is a sense of regret that hangs over Chimes at Midnight that is impossible to ignore, as if Falstaff has become a metaphor for Welles himself.

The story, conceived in these terms, is "too easy." Fortunately, the film has several other stories to tell, mainly through its images.

The film is wonderful and exasperating, the work of a genius, the reflections of an egotist, delicious utterances of great language and muddied speeches in other instances.

Audience Reviews for Chimes at Midnight

Welles is obviously a great Falstaff but not in the ways you'd expect. His bold performance consistently defies conventional takes on the character.

Perhaps I was not in the mood to take in one of Shakespeare's lesser regarded works but I completely did not enjoy this Welles' masterpiece.

Considering that just about everything Orson Welles directed after "Citizen Kane" was compromised by studio interference and/or budgetary constraints, it's remarkable that he made as many brilliant movies as he did. "Chimes at Midnight" is one of his very best. Magnificent yet flawed, so well does this film mirror both its creator and the character he plays in it, lovable rogue Sir John Falstaff, that its very flaws almost become virtues. Though it is directed, photographed and edited with extraordinary skill, "Chimes at Midnight" contains some of the worst dialogue synching I have ever come across. A restoration of the film has long been rumoured, but such is the quantity of slapdash dubbing, short of creating a brand new soundtrack, no amount of judicious tweaking is ever likely to completely reunite Shakespeare's words with the lips that are uttering them. In spite of this, in spite of the difficult language and the dizzying editing style, which exhilarated but ultimately exhausted me, "Chimes at Midnight" is a wonderful movie.

magnificent. the finest shakespeare adaptation i've seen with one of the finest battle scenes ever filmed! absolutely breathtaking. it's criminal that this doesn't have a criterion and armageddon does