Children of a Lesser God1986 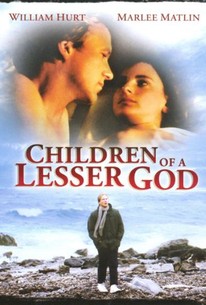 Critics Consensus: Children of a Lesser God transcends its transparently noble goals thanks to a pair of absorbing performances from William Hurt and Marlee Matlin.

Critics Consensus: Children of a Lesser God transcends its transparently noble goals thanks to a pair of absorbing performances from William Hurt and Marlee Matlin.

Critic Consensus: Children of a Lesser God transcends its transparently noble goals thanks to a pair of absorbing performances from William Hurt and Marlee Matlin.

Children of a Lesser God Videos

Children of a Lesser God Photos

Children of a Lesser God is a love story about a speech teacher who falls for a beautiful yet distant deaf girl in a small New England school for the deaf, and the obstacles that they face due to their differences. William Hurt plays James Leeds, a renegade teacher with an unconventional approach to education and a resume that includes stints as a bartender and a disk jockey. Upon his arrival, he is warned by school administrator Dr. Franklin (Philip Bosco) not to get creative with his instruction. Naturally, Leeds already has his mind set on his teaching plan and proceeds to play loud rock music in class in order to teach the students to feel the vibrations of the music and get them to try to speak phonetically. But a new element enters his life when he meets the attractive custodian, Sarah (Marlee Matlin). An exceptionally intelligent yet extremely bitter young woman, Sarah is a graduate of the school who has decided to remain there, in the confines of her world of silence; it's safer for her to be with her own "people" than to face what she perceives as a cruel and uncaring world. She hardly seems interested in James and will only communicate with him through signing, although she can read lips and even speak a little. James learns from Sarah's mother (Piper Laurie) that Sarah was sexually molested as a teenager; this explains why she is so wary of his attempts to form a relationship with her and why she is so full of fear. Eventually, James does get through to Sarah and the two fall in love, although both have to learn new ways to communicate their feelings. Though it seldom resembles the Mark Medoff play on which it was based, this directing debut from Randa Haines won an Best Actress Oscar for Matlin, for her first screen performance.

News & Interviews for Children of a Lesser God

View All Children of a Lesser God News

Critic Reviews for Children of a Lesser God

Children of a Lesser God, though given a handsome openness in Director Haines' production, cannot transcend the banalities of the play. But Matlin does. She is, one might say, a miracle worker.

Hurt seems to be bucking for at least two Oscar nominations here: one for his performance, the other for best echo effects by an interpreter of signed speech.

A touching and universal love story.

A genuinely touching love story and a clever gloss on the barriers and extensions of language.

There's scarcely a single moment in it that seems to be spontaneous.

This is romance the way Hollywood used to make it, with both conflict and tenderness, at times capturing the texture of the day-to-day, at times finding the lyrical moments when two lovers find that time stops.

A sappy but often genuinely moving and angry film about love, life and deafness.

Not unlike The Miracle Worker, this teacher-student-breakthrough movie updates the genre with several changes: the teacher (William Hurt) is an unconventional male, the student (Marlee Matlin) is an attractive female, and their relationship involves sex.

Unfortunately, launched Matlin on us.

An amphibian movie which introduces us to the world of the deaf and then moves gracefully into universality as it explores the difficulties we all face in love relationships.

Audience Reviews for Children of a Lesser God

A sincere and touching drama with laudable performances by William Hurt and Marlee Matlin, whose wonderful chemistry together always convinces us of their characters' feelings for each other and of the real, authentic difficulties they meet in their relationship.

A commentary on the state of the deaf community after so many years of innovation in teaching techniques, medicine, and biology, was missing from this romantic drama. Marlee Matlin was a great choice in casting, and her emotional portrayal of a deaf custodian was surely realistic and award show worthy, but many theater goers were probably filled with unanswered questions concerning what it is to be taken advantage of. The relationship between herself and Hurt's character is not only rooted in traditional truth but has a deeper chemistry that resonates. It was very enjoyable to watch Hurt teach children through relatibility, which is a tried and true formula, but he never gets Matlin out of her shell to a point where one can be satisifed. Slightly underwhelming.

Slow and boring. The "love" seemed rushed and shallow for the depths of such drama! Performances for this movie have been overrated!

If the original play was "tough" as the Flixster summary describes it, I'd be really interested to watch that. Its movie offspring is well-made, well-acted and offers a dignified look at having a disability, but it's also blurry and squishy like romance movies of the 80s tend to be. There's only a handful of moments where I felt like it was having any sort of impact. At the same time, though, I have a deaf friend who really dislikes this movie, so maybe there's some sort of enormous insult to deaf culture folded in here. I dunno. Interesting movie all around, a strong performance from Marlee Matlin (Oscar-winning? Amongst her weak competition, sure, but probably not in most years), and a generally compelling and compassionate narrative, but nothing life changing. It may open your eyes a bit if you don't know anything about deaf people. There's some sensible scene work - I was really involved with the scene where Marlee Matlin and John Hurt went to a party where everyone except Hurt was deaf and he felt so awkward and uncomfortable that he asked to go home. Without saying much else, it's an interesting way of looking at how Matlin's character deals with every day of her life. One thing that I found particularly annoying about it was Hurt's need to verbally repeat all of Matlin's sign language. It feels forced; why not subtitles? I have a really hard time imagining anyone watching a movie about deaf people having a problem with subtitles.

Children of a Lesser God Quotes