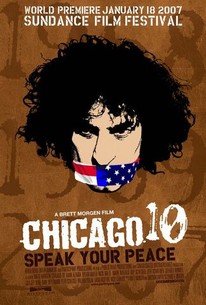 The Kid Stays in the Picture director Brett Morgen turns his unique eye toward the infamous 1968 Democratic National Convention in this 2006 documentary. Using a star-studded voice cast along with a blend of archival footage and animation, Morgen tells the story of the eight demonstrators who were arrested and tried for conspiracy in the wake of the violent anti-war protests. Featuring the voices of Nick Nolte and Mark Ruffalo among others, Chicago 10 premiered at the 2007 Sundance Film Festival. ~ Matthew Tobey, Rovi

Chicago 10 is that nearly perfect marriage of style -- edgy, different -- to documentary subject: 1968, that seminal year so celebrated in 2008 for changing the America that came after it.

Makes skillful use of documentary footage to relate what happened in the streets of Chicago, culminating in what was routinely described at the time as 'a police riot.'

A vibrant, unconventional documentary about the conspiracy trial of the so-called inciters of the riots that occurred during the 1968 Democratic National Convention.

If nothing else, it's a welcomed alternative to the more straightforward and serious film that Spielberg is likely to deliver.

Given the filmmaker's privileged perspective of hindsight, to notconsider the real-world repercussions of their theater, to not connect the dots between 1968 and 2008 is a squandered opportunity.

It's a fresh and important new take on one of the most tumultuous periods in American history.

Chicago 10 is definitely worth a look for skeptics young and old.

It may be most effective for audiences who do need a spoonful of sugar to make the historical medicine go down.

Revisits 1968 as a court room drama, through a fresh cinematic look to avoid period clichés while broadening history's appeal to both boomers and their children.

Chicago 10 isn't perfect, but is required viewing for anyone who wasn't around at the time, if only as a reminder of the effectiveness of citizen action.

Morgan is more interested in recreating the confusing experience of living through those times than in evaluating them in a perspective informed by 40 years of hindsight.

I turned this documentary off. How could you fuck this up? Seriously. I tell you how. You mix terrible animation with Rage Against the Machine playing the first five minutes during the set-up of this damned thing. Yeah, the film's about something from the '60s and RATM is playing. NICE CHOICE ASSHOLES! And I couldn't hear a damn thing cuz Tom Morello is SOLOING HIS BALLS OFF and the animation makes me want to cry. UGH!!

This is a documentary about the protest at the 1968 Democratic convention and the trial that followed. This is an important story worth telling, and the actual documentary footage works pretty well, but the film shoots itself in the foot with its animated recreations. The first problem is that the animation in these reenactments looks horrible; it?s a form of rotoscope animation drawn over live actors, but it isn?t done anywhere near as well as it was in Richard Linklater?s films, it looks like something that would have been used in a computer game from 1995. Secondly the voice acting is ridiculous on a regular basis, particularly with the judge whose voice sounded like a mix between Mr. Magoo and Froghorn Leghorn, the facts of this trial are more then enough to feel like a miscarriage of justice, the added effect is cheesy and unneeded. The film uses modern protest songs by the likes of Rage Against the Machine and Eminem, this initially felt out of place, then again the last thing the world needed was yet another montage of 60s civil disobedience to the tune of Buffalo Springfield. I think what the film really needed was some contemporary interviews looking back, six of the ten are still alive and I would have loved to hear their take today.

Entertaining and informative, but lacking depth

Animated trial segments with celebrity voice actors distract from more gripping news footage about those who protested a government which denied its citizens their rights.