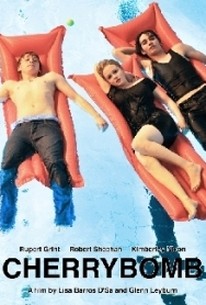 A teenage seductress pits two best friends against one another over the course of steamy summer that quickly spins out of control. Luke (Robert Sheehan) and Malachy (Rupert Grint) were best friends until Michelle (Kimberly Nixon) came into the picture. Fearless, free spirited, and drop dead gorgeous, she's just returned to Belfast to live with her father (James Nesbitt) when she catches the attention of studious teen Malachy. But Malachy isn't the only one with eyes for Michelle; his rebellious best friend Luke (Sheehan) finds her just as irresistible, and before long the two pals have entered into a heated competition for her affections. As the summer heats up, so does their rivalry, leading to a tense showdown that soon threatens to turn deadly. ~ Jason Buchanan, Rovi

A valiant effort, but a little too yoof by numbers to be taken seriously.

It's a pity this reasonably polished slice of Skins-style youthsploitation makes such a fake and undangerous lurch into pills-and-vandalism melodrama.

It's cheering to see a Northern Irish story moving beyond the Troubles, but the merely adequate theatrics on display aren't noteworthy in themselves. Grint looks set for better things.

Strong turns from Grint and Sheehan, and a punchy storyline elevate this from TV drama to something powerfully cinematic.

A few flashy visual tricks aside, putting 'bomb' in their title is the only truly risqué thing about Lisa Barros D'Sa and Glenn Leyburn's rookie outing.

Unfortunately, the longer the picture goes on, the more it becomes clear that we are missing any kind of serviceable plot.

Any underlying moral the film attempts to put across gets blurred by a lifeless and hackneyed script.

Despite his efforts, and the film's attempts to shock, it's pretty pedestrian stuff, and won't hold much interest for anyone on the wrong side of 20.

t's the cast, though, who make this film special. Sheehan gives an utterly mesmerising performance as the troubled Luke, almost bursting out of his skin with frustration and mischief.

A trio of captivating performances from the young leads and a mesmerising soundtrack cannot drag Cherrybomb out of the creative mire.

Though we've seen boys jumping through hoops for girls before, Cherrybomb's got a sting in its tail you won't forget.

Pleasantly surprised by this. I didn't actually recognize Rupert Grint and, judging by the description on the back of the case, I was expecting the usual out-of-control American teen story. I didn't realize it was British until I put it on and I think this was better for it. I liked all three of the main characters, even though all were obviously troubled in various ways. The young cast did a good job and the characters were well written. A small criticism would be that the ending is a little brief. I would have liked to have known what actually happened to the three of them. However, the reasonably short running time means this doesn't outwear it's welcome and it is well paced and keeps you interested.

The first feature from British shorts directors Lisa Barros D'Sa and Glenn Leyburn, this is a small-scale but deceptively affecting teen drama. Following three alienated adolescents around a bleak Belfast, Cherrybomb's story is nothing new: the aimless youngsters hang out, get it on, and drink. Inevitably, harder drugs also make a critical appearance. However, while the dialogue is a tad clunky, the young leads - Rupert Grint (in his first truly "adult", if not adult, role), Kimberley Nixon and Robert Sheehan - share an authentic chemistry. Visual flourishes elevate TV-drama themes to make for a genuinely fresh, cinematic piece. Which is a back-handed compliment when, even with Grint's Harry Potter popularity, Cherrybomb couldn't score a big-screen run here. With good support from the likes of James Nesbitt, D'Sa and Leyburn's promising debut has more emotional grit than we might expect from a teen flick. Disturbing twists and turns create a genuine edginess to proceedings.

Cherrybomb is a stylish, yet realistic portrayal of contemporary teenagers. The story is pretty simple -- two best friends Malachy (Rupert Grint) and Luke (Robert Sheehan) meet a beautiful girl Michelle (Kimberley Nixon) who has just moved back to Belfast from London; her dad is Malachy's boss Dave Crilly (James Nesbitt). She challenges the boys to compete for her affection by undertaking a series of reckless stunts, which include fighting, stealing and wrecking cars, demolishing properties, etc. However there's more to Cherrybomb than this main premise. All three protagonists are complex characters; the fact that they are 16-year-olds explains their insecurities, inability to acknowledge their true feelings, bravado, recklessness, overly emotional response to things happening around them, and -- stupidity. Michelle's parents are divorced and disinterested in their own daughter, who they treat like a tennis ball. Michelle's mother sends her to live with her dad, but he prefers to spend time with his teenage lover. Crilly's selfishness frustrates his "princess", and in turn she initiates the ultimate rebellion. Luke lives with his alcoholic, irresponsible father Smiley and "businessman" brother Chris, who forces Smiley and Luke to sell drugs. Among his friends, Luke is perceived as an attractive, flamboyant, carefree bloke; but behind this facade Luke is ashamed of his father, frustrated by his brother, and utterly unhappy with his entire family setting. His best friend Malachy is the only ray of light in his life. Luke gets the girls easily, but he disposes of them quickly, because the entire notion of a stable relationship is alien to him. Malachy has a stable family, and he excels at school. His middle class parents have high hopes for his future, but they fail to notice that there's more to their son than just good marks. They disapprove his friendship with Luke, but Malachy sticks to his pal and copes well with Luke's nasty behaviour. Malachy is clever and self-confident, but he doesn't want his friends to see him just as mummy's nerdy little boy; so he drinks, smokes weed, snorts cocaine, swears. However, it is not Luke but Michelle who ultimately pushes him over the edge. Both boys are attracted to Michelle; however, it is Malachy who soon becomes completely infatuated by her. As the competition gets increasingly dangerous, both Luke and Michelle are surprised by the fact that "the good boy" Malachy accepts the challenges and doesn't give up. Luke can afford to do whatever he wants because he's got nothing to lose; while Malachy jeopardises his good relationship with his parents, his job, and his academic future. Although Michelle seems to have more in common with Luke, she finds herself attracted to Malachy, disarmed by his sincerity. But, at the same time, she is afraid to love and let love. Halfway through the film the dynamics of the trio changes. Luke freaks out at the possibility of losing his best friend to this girl; and what was Malachy and Luke competing for Michelle, turns into Michelle and Luke competing for Malachy. Michelle grows increasingly annoyed by Luke's crazy antics, while Luke can't understand Malachy's infatuation with this girl and is ultimately jealous and baffled by the idea that his best friend would choose Michelle over him. The entire action in Cherrybomb happens over the span of a weekend, making the movie very intense and fast-paced; and the ultimate rebellion results in tragedy which changes the survivors' lives forever. Acting wise, the greatest expectations were laid on Rupert Grint's shoulders, because we were all curious to see whether he could make us forget about Ron Weasley; whether he can suppress his natural comedic instincts and be a successful drama lead; whether he can pull off a thick Norn Iron accent; and whether he has an acting future after Harry Potter. And the answer to all these questions is YES! There was no trace of Ron Weasley (or Grint's other movie characters) there: he gave a very subtle and realistic performance. It is hard to believe that this is the same actor who always gets the funny lines and handles a majority of slapstick in Harry Potter. Grint brings a touching sincerity and warmth to the role of Malachy, a boy who falls in love with a girl for the first time, and is willing to risk everything just to be with her. Robert Sheehan, on the other hand, gives a completely different performance. Luke is flamboyant and extreme, and Sheehan's performance is suitably over-the-top in the most positive way: he portrays this tense, edgy, emotionally broken teenager heartbreakingly and persuasively. Sheehan is definitely a force to reckon with, and he and Grint play each other off superbly. Kimberley Nixon gives a convincing portrayal of a neglected, insecure girl. She and Rupert Grint have a wonderful on-screen chemistry. James Nesbitt is fantastic as Michelle's father: he generated a lot of laughter, and initially appeared as a selfish but relatively benign man who suffers from midlife crisis. However, as the movie progresses, he is exposed as an aggressive, violent man. The directors' style is very creative and efficient. Instead of flashy special effects, they opt for an imaginative use of real-life sets, unusual camera angles, lots of close-up shots, expressive colours and clever editing. The film does contain some violent and drug related scenes, nudity and foul language -- however even the rawest of scenes are done very stylishly. Cherrybomb deals with the challenges of growing up, accepting responsibilities and falling in love for the first time. This dark, artsy movie is definitely not kiddie-friendly; but, the combination of great performances, beautiful visuals, and uncompromising realism makes it highly recommendable. Anyone interested in an engaging, thrilling and gripping emotional roller-coaster should enjoy Cherrybomb.