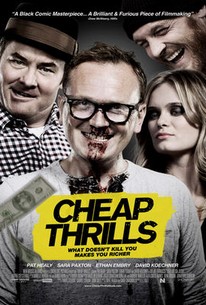 Critics Consensus: Gleefully nasty and darkly hilarious, Cheap Thrills lives down to its title in the best possible way.

Critics Consensus: Gleefully nasty and darkly hilarious, Cheap Thrills lives down to its title in the best possible way.

Critic Consensus: Gleefully nasty and darkly hilarious, Cheap Thrills lives down to its title in the best possible way.

Cheap Thrills follows Craig (Pat Healy, Compliance), a struggling family man who loses his low-wage job and is threatened with eviction. In an effort to delay facing the music at home, he heads to a local bar and encounters an old friend (Ethan Embry, Empire Records). The two friends are roped into a round of drinks by a charismatic and obscenely wealthy stranger (David Koechner, Anchorman 2) along with his mysterious wife (Sara Paxton, The Inkeepers). The couple engages the two friends in a series of innocent dares in exchange for money over the course of the evening, with each challenge upping the ante in both reward and boundaries. It seems like easy and much needed money, but the couple's twisted sense of humor pushes just how far Craig and his friend are willing to go for money and cheap thrills. (c) Drafthouse

E L Katz's film delivers exactly what the title promises. It is a very bloody, very violent fairground ride of a movie that ratchets up the tension as its two hapless anti-heroes compete desperately for money.

It's a thought-provoking ride, particularly in a post-financial crisis world where a combination of desperation and temptation can make anyone consider doing the unthinkable.

The script is smarter than the premise sounds, with writers David Chirchirillo and Trent Haaga dispensing enough information to make victims both sympathetic and despicable, the instigators charismatic and sinister.

For genre fans, Katz's film will go down as a punchy and absorbing diversion, but it's also an offer you can refuse to believe. A better film would have given you no choice.

The film would be nasty if it weren't clever (and sometimes horribly funny).

Cheap Thrills is clever, disturbing and eyebrow raising, but in terms of story, it is anything but cheap.

A cheap, quick thrill ride that may be entertaining and even vicious, but without any kind of real payoff.

The sort of original, intense, darkly comic character-driven thrill ride that I'd love to see more genre filmmakers working on

It's a compact, twisted, delightful (if you're into this sort of thing) nugget of exploitation that thrives on committed performances and sound craftsmanship.

Craig Daniels (Pat Healy) is having a hell of a day. He's been fired on the very same day he's recieved an eviction notice on his front door. Content to drink his troubles away, Craig runs into an old friend from High School. Together they start catching up and run into a unique couple, a couple who starts offering them money simply for doing oddball things for their amusement. The duo agrees and even goes back to the couples house with them, and that's when things really start to get bizarre. I feel like I've seen something similar and far more serious before, but I can't place my finger on it. What I really liked about this film was that despite it's B-movie status, and obvious lack of quality writing, what goes down isn't as expected as you would think. A lot of it really was surprising and they do spare us the pain and torture of doing what is obvious. I also enjoyed Pat Healy as Craig, he's not the kind of character you'd expect to see in a movie like this, and he added an interesting dynamic to a cast that was otherwise pretty droll. Cheap Trills has a few funny and unexpected moments in it, and to be honest it was better than I thought it would be. It still however very much deserves it's B-movie status and reeks of inexperience.

I think that those who rated this movie particularly highly wanted to embrace a film that puts the unthinkable on film but it is purely sensationalist at its heart. Some films were just never supposed to be made.

I know we're supposed to laugh along as the two lead characters are humiliated and debased, but I can't help but feel violated by director E.L. Katz as the film delves into the twisted and depraved.

There's a much like this, that I reviewed on here, called The Brass Teapot. The concept is similar, this couple, who are having economical problems, finds a teapot that dispenses money whenever they physically hurt each other. Things start innocuously enough, before it gets darker with the teapot demanding more and more with each 'dare'. If you read my review of that movie then you know how utterly disappointed I was in that it just played it too safe with its concept. It was so concerned about not offending anybody that they laid waste to an excellent concept. To what extremes would you go to for money and, by extension, what would you do to achieve the life you want? The Brass Teapot played it too safe and that was ultimately its downfall. This brings us to this film. If you couldn't guess by its title, this film isn't afraid, at all, to piss of some people in order to get its story across. This movie has all of the balls that The Brass Teapot should've had and then some. Also, surprisingly, or perhaps not, this film is also one of the best satires on reality TV game shows and the social structures that sees those with the power, and the money, humiliating those less fortunate for their own amusement. The middle-to-lower classes have been so utterly screwed by the economic collapse of 2008, which is when these social wars really started, that people would do whatever it is they need to in order to get their family just through one more month. Because of that you have these reality shows, there's this one currently Deal With It, where contestants are told to practically humiliate themselves for money and for their, the audience's and the hosts', amusement. It's a sad state of affairs, but it is the way the world is at this moment. I think this film captures that struggle the lower classes face, with being laid off, being threatened with eviction, and the desperation one must feel to do something that will get you through one more day. In many ways, it's as much a heartbreaking story, because of the truths it showcases, as it is a darkly hilarious film. At the same time, there's this pleasure that the film takes in just showcasing horrible people, Colin and Violet, forcing Craig and Vince to do these things for their own amusement, playing lifelong friends, against each other in a sick game. Of course things start innocently enough, with Colin giving them money for doing a shot quicker than the other guy, slapping a stripper's ass or punching a bouncer. As the night wears on, however, the dares start to get more extreme, as was to be expected given the film's title. I'm almost tempted to spoil the dares, but part of the film's fun is the reaction it's gonna cause in the audience, so why ruin the best part of the film. Let's just say the film lives up to its title in the best way possible. It might be a little too nasty, or ugly, for some people to tolerate, and that means that the movie did its job. As much as it's a dark comedy, it's also a film that gets you thinking about some very serious issues. I've already mentioned some of these earlier in the review, so no need to go over them again. The writing is top-notch because it manages to take some very serious themes and completely skewer them in a way that, at least to a film nerd, is gonna be massively entertaining. Perhaps not to a broader audience, though I think there's enough here for most people to enjoy, but it's an incredibly smartly written film. The acting is also quite good. It's a film that's impeccably cast, there's no one else that could've played these four characters than the actors that played them. They may not be among the acting "elite", but the characters suit each actor's strengths. I realize that sounds like a backhand compliment, but I really do think all the actors are incredibly talented, but they're not people that others would really think about if they were to compile a list of their favorite actors. That's a shame really cause the acting is probably one of the film's strongest points. And this is a film with a lot of greatness in it. This might not end up being the best film I watch all year, but it's already one of my favorites. Smart, funny, nasty, it was everything it should've been and then some.