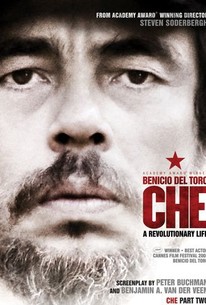 Critics Consensus: The second part of Soderbergh's biopic is a dark, hypnotic and sometimes frustrating portrait of a warrior in decline, with a terrific central performance from Del Toro.

Critics Consensus: The second part of Soderbergh's biopic is a dark, hypnotic and sometimes frustrating portrait of a warrior in decline, with a terrific central performance from Del Toro.

Critic Consensus: The second part of Soderbergh's biopic is a dark, hypnotic and sometimes frustrating portrait of a warrior in decline, with a terrific central performance from Del Toro.

Part 2 of director Steven Soderbergh's Che Guevara saga begins with the famed Cuban revolutionary at the absolute peak of his fame and power. Disappearing suddenly, Guevara subsequently resurfaces in Bolivia to organize a modest group of Cuban comrades and Bolivian recruits in preparation for the Latin American Revolution. But while the Bolivian campaign would ultimately fail, the tenacity, sacrifice, and idealism displayed by Guevara during this period would make him a symbol of heroism to followers around the world. Parts 1 and 2 were screened together at the 2008 Cannes Film Festival. ~ Jason Buchanan, Rovi

Saying that a film has too much insight is hardly damning.

Darker in tone and more introspective thematically, Che: Part 2 is the more interesting of the two films.

His film is brilliantly shot, capturing the chilly bareness of the landscapes through which the rebels yomp, but it's formalist and clinical to a degree that will challenge viewers eager to identify with the figures it depicts.

This film is stronger than the first. The pale, sepulchral tones give a ritualistic eeriness to the long pursuit scenes.

[Soderbergh's] direction is flawless; choppy editing, a muddy pallet and a camera that gets up close and personal with every facet of the fight, however small, effectively making the viewer part of the revolution.

It seems the most important point the director wanted to make was that Mr. Guevara accomplished all he did while fighting terrible asthma attacks.

Soderbergh's austere narration and intent to wilfully frustrate a conventional, hagiographical account of Che will alienate, but the steadfastness of this approach bears fruit

At times it is beguiling, but Soderbergh is no Malick, and trying to copy him is a bad move.

Superbly filmed by director Steven Soderbergh, and Del Toro's immersive performance in the title role is of the highest class.

Ultimately, whatever the eventual shape this movie comes in, it is bravura, ambitious film-making and a welcome, post-Ocean's 11 return to serious form from this talented director.

This well-made second chapter of Soderbergh's two-part epic, centered now on Che in the Bolivian guerrilla, is more objective than the first one and does a better job portraying the character more as a man than a hero, which helps make it a slight improvement over Part 1.

A sprawling, epic look at the life of Che Guevara through the lense of Steven Soderbergh. Del Toro is brilliant in the lead.

Say what you want about the man's politics, you gotta admire his huevos.