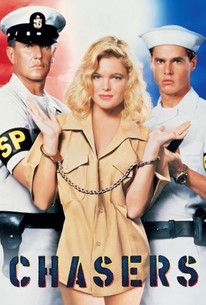 In director Dennis Hopper's comedy reminiscent of The Last Detail, Rock Reilly (Tom Berenger), a gruff naval veteran who plays by the rules, arrives at a Marine base, in tow with his wheeler-dealer companion Eddie Devane (William McNamara), and finds himself assigned to escort the voluptuous Toni Johnson (Erika Eleniak) to military prison, Toni being sentenced from seven to ten years for assault and going AWOL. As in The Last Detail, the three service-persons get to know each other (in the case of Toni and Rock, they get to know each other intimately) as they make their way across the Southeastern seaboard to deliver Toni to prison. As they travel on, Toni repeatedly tries to escape from the two men as the trio encounters an array of guest-star cameos (Gary Busey, Seymour Cassel, Crispin Glover, Dean Stockwell, Frederic Forrest, and Marilu Henner -- among others). Even Hopper himself makes an appearance -- as a dirty old man with an inflatable date.

Robert Priester
as Seaman No. 1

Jon Rodgers
as Seaman No. 2

Matthew Sullivan
as Seaman No. 3

Victoria Duffy
as Female Sailor No. 1

Elizabeth Hawkins
as Female Sailor No. 2

Robert Pentz
as Street Tough No. 1

Melissa Detwiler
as Person No. 1 on Bridge

Ted Detwiler
as Person No. 2 on Bridge

Like the title says, it's about chasing, but more importantly, it's a lot like the 70s movie, The Last Detail, except it attempts to be funny. It's not that funny, but there are a few good scenes. Overall, it's so-so.