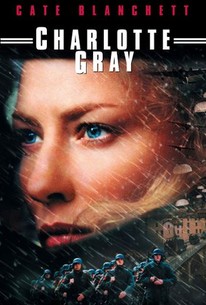 In 1942, London is in the middle of the Blitz. The city is blacked out and bombs shatter the night. Charlotte Gray is an ordinary woman who travels from Scotland to London to see how she can help. At a party, she meets Peter, a battle-weary RAF pilot on leave, and they fall in love. But the affair is abruptly halted when Peter is called back into service and his plane is shot down over France. If he is alive, he is probably hiding, sheltered by the French Resistance. Soon, Charlotte is also on her way to France, for like many women fluent in French, she has been recruited as a secret agent, working to support the Resistance. She could have asked for an assignment at home, but instead she jettisons fear, accepting a dangerous mission behind enemy lines, keeping secret her personal mission to find her missing lover. In a world where secrecy is all around, she discovers that she can only trust what is in her heart.

Tom Goodman-Hill
as Businessman at Party

Michael Fitzgerald
as Businessman at Party

Rosanna Lavelle
as Sophie the Receptionist

The pace is so lethargic and the focus so diffuse that it's hard to get a fix on Charlotte beyond needless glamorization.

If this is melodrama, it's melodrama of a superior rank, and I salute it.

While Blanchett's presence is surely felt in virtually every scene of the movie, her acting isn't. We don't connect with her at all.

This is Blanchett's film. Her quiet, detailed work leaves you wanting more.

Not a great work but wields powerful weapons in its director and its star.

There is velvety rich cinematography, an evocative score, beautiful period pieces and some captivating performances, but they fail to unite and do justice to the literary source.

One day Blanchett may get a part that melts her virginal ice queen formality, but this isn't the film

Does a pretty good job of capturing some of the least romantic aspects of World War II.

An adaptation that is often confused as to whether it's a love story set in wartime, or a war story with a love angle.

The story of an ordinary woman in an extraordinary time.

Such a different perspective on a war-time film, showing this through a strong woman?s eyes, in a man?s world. This story is essentially driven by love. Blanchett yet again, pours emotion into her performance and is of course a believable role. I too, have to give Billy Crudup credit for his performance here which I feel is his greatest to date. Impressive all around with a much enjoyed plot.

Cate Blanchett is magnificent as her title role in this war-drama film.