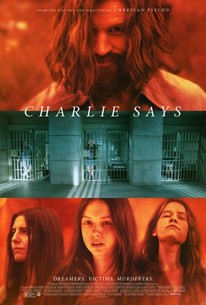 Critics Consensus: Charlie Says approaches its infamous subject from a welcome new angle, but suffers from a disappointing lack of depth in its treatment of the story.

Critics Consensus: Charlie Says approaches its infamous subject from a welcome new angle, but suffers from a disappointing lack of depth in its treatment of the story.

Critic Consensus: Charlie Says approaches its infamous subject from a welcome new angle, but suffers from a disappointing lack of depth in its treatment of the story.

Three young women were sentenced to death for the infamous Manson murders. Their sentences became life imprisonment when the death penalty was lifted in California. One young graduate student was sent in to teach them. Through her, we witness their transformations as they face the reality of their horrific crimes.

If nothing else, Charlie Says puts Van Houten in the center of her own story. Look at her game, girl.

While well-intentioned and thoughtful, "Charlie Says" is too ambivalent and too safe to deliver much in the way of original insight.

A fascinating and feminist exploration of Manson's first victims: the girls themselves.

You want to see how a person could surrender herself - her self - to something so diabolical, which demands a higher level of insanity than the filmmakers can muster.

There's just not enough to Charlie Says, an ambitious, but uneven drama about the oft-sensationalized 'Manson Girls.'

Suffering through what Charlie says again, without purpose, is unfair punishment, if you ask me.

Working with material that could have easily been sensationalized or exploited, Mary Harron manages to infuse dignity into a work whose story and certainly toxic characters don't deserve any.

[T]he filmmakers never fully convey the fervor that led the Manson women astray, as Peter Jackson did with his similarly true-crime "Heavenly Creatures."

For all its strengths as a film, we still don't know any more after watching Charlie Says than we did before.

Charlie Says makes a strong case for an even grayer area: That perhaps these women can be victims and guilty of horrific, unpardonable crimes. It's an unsettling thought. But at least, unlike the exaltation of Ted Bundy's abundant charm, it's a new one.

Charlie Says is a film about female solidarity in even the harshest circumstances, rather than yet another take on the Charles Manson story.

Charlie Says, for all of its noble intentions, has the spirit and nods towards similar territory as Helter Skelter or The Manson Family but, whether due to restraint, interference or whatever, just never quite gets there.

There are no featured reviews for Charlie Says at this time.