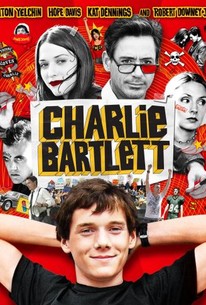 Longtime film editor Jon Poll (Meet the Fockers and Austin Powers in Goldmember) makes his directorial debut with this coming-of-age comedy about a wealthy public school system newcomer (Anton Yelchin) who wins over his skeptical classmates by serving as a surrogate psychiatrist to the troubled student body. Robert Downey Jr., Hope Davis, and Kat Dennings co-star.

Abigail Bernardez
as Cheerleader No.1

Laura Jeanes
as Cheerleader No.2

Annamaria Janice McAndrew
as Cheerleader No.3

Amelia Tenttave
as Len's Girlfriend No.1

Amabelle Singson
as Len's Girlfriend No.2

The promising themes peter out as the film loses direction, though, and Bartlett is neither sympathetic enough to root for nor dumb enough to laugh at.

The movie as a whole is a sweet pill to swallow.

Charlie Bartlett is a refreshingly entertaining character study that refuses to dumb down its youthful cast or bury their concerns in service of a catchy soundtrack.

The characters remain halfway between genuine comic creations and realistic individuals, and the whole narrative feels artificial, stuck in the tension between being a morality play and a freewheeling comedy.

Those waiting for the arrival of the next Juno may want to skip Charlie Bartlett, a relentlessly earnest teen film about a 17-year-old misfit who's been tossed out of one prep school after another for bad behavior.

Imagine an R-rated Ferris Bueller with only the most annoying parts of the younger Matthew Broderick's screen persona emphasized and you'll draw a bead on Bartlett.

There are sweet moments, and there are funny moments, but it all just becomes so eye-rollingly calculated that it's hard to appreciate.

'It is our duty as teenagers to piss off our parents,' Charlie says. The film succeeds only in pissing off the viewer.

Lightweight fare, but a pleasant outing.

Charlie Bartlett plays it too safe.

Charlie Bartlett is a poor man's Rushmore. There is a great film waiting to be made about psychiatry, anti-depressants and our youth, but this isn't it.

A fun but rather annoying film that doesn't really give much to the audience. More aimed at teenage girls, I'd recommend it simply down to Yelchin and Downey Jr's performances.

Charlie Bartlett: Oh trust me doc, bringing psychiatric drugs and teenagers together is like opening a lemonade stand in the desert.  "Popularity is a state of mind." I am extremely pleased with Charlie Bartlett. Not that I am surprised I liked it so much, as I am a huge fan of both Anton Yelchin and Robert Downey Jr., and the premise was awesome. Sure there were plot elements that were less than unlikely and scenes that really turned up the melodrama for no particular reason, but for the most part it was a really good set in high school movie. Charlie Bartlett gets kicked out of his fancy private school for selling fake ID's and must go back to his huge mansion with his mother and attend public school. Charlie less than fits in with the kids at this new school, so he tries to fins a way to win them over. He chooses drugs. All kids want to get high and that is his way to get popular and also make some cash on the side. Then he starts offering psychiatric help for all the kids in his school in the bathroom. The principal isn't very fond of him and that is heightened when Charlie and his daughter start hanging out. I thought the film was extremely cool and had a pretty good concept. I like the idea of a kid no one likes finding a way to become the cool kid. Yeah it has been done before, but never like this. Yelchin owns every role he's ever had. Not once have I seen him in a movie and not been totally impressed and convinced by his performance. That is saying quite a bit since he started young. It doesn't look like he is going to fade out like some young actors do, at least I hope not. The movie has some fun sequences and some insightful ones. The insightful ones are a little overdone, I'll admit; and yeah, there are some incredibly cliched characters. But come on, high school is one big cliche and all the characters in this film really exist in just about every high school in the world. Overall the film works because of its cool premise and two actors who nail their roles.

Charlie Bartlett was a decent coming of age comedy. However there are far better comedies out there that have addressed the subject. Director Jon Poll is no John Hughes and it shows. Charlie Bartlett tries to be a copy of many of Hughes' classic films. The film a good attempt at being a teen comedy with brains, but it leaves a lot to be desired. Actor Anton Yelchin is a so-so actor, and he manages to have good screen presence. I thought that the film was mildly entertaining and it was funny and dramatic in parts. Charlie Bartlett is nothing really great as a comedy, but it does manage to be entertaining. I felt that at times, the film suffered from poor writing and it could've been much better than it was. Charlie Bartlett had the potential of being a great comedy, instead the film lacks in some respects and the films conclusion is average. The film is a decent film to watch, but it's not a memorable film to re-watch and enjoy over and over again. The film manages to entertain, but leaves you wanting more. For what is, Charlie Bartlett is a good enough try at a teen comedy, however it's not as memorable as other films in the genre. A fairly forgettable film in the genre, one that does make you laugh, but doesn't do anything refreshing with its ideas. A decent film with laughs, however it's clear that this is a pretty forgettable film.