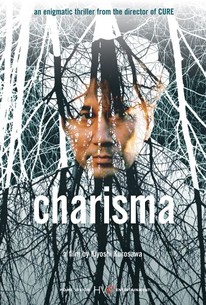 Idiosyncratic auteur Kiyoshi Kurosawa directed this bizarre allegorical tale about a tree named Charisma. Goro Yabuike (Koji Yakusho) is a burned-out hostage negotiator called to rescue an MP from a gun-toting lunatic demanding that "rule of the world" be restored. In a moment of indecision, he fails to act; as a result, both the MP and the lunatic die, while Yabuike is sent on a forced vacation to an unnamed forest area. There he comes upon a single tree surrounded by an I.V. pole, metal supports, and strange altar-like objects. Yabuike soon discovers that the locals are enmeshed in a battle over the tree's future. The plant is staunchly, sometimes violently defended by Kiriyama (Hiroyuki Ikeuchi), a young resident of an abandoned sanitarium who believes that Charisma is unique and should be preserved. On the other hand, Mitsuko (Jun Fubuki), a do-gooder botanist, credits the mysterious tree with poisoning its fellow plants and upsetting the eco-system. Other characters include thuggish lumberjacks and rapacious tree-hunters hoping to buy or steal the rare tree at any cost. As things come to a head, Yabuike is forced to make the sort of decisions of which he was incapable as a hostage negotiator. Is Charisma a force of evil or the victim of the obsessions of those around it? Is it the unique specimen that should be saved or the entire forest? Again Yabuike is flummoxed, but this time he acts before it is too late. This adventurous, psychedelic film explores many of the same themes of the individual's fate in modern society as Kurosawa's early work, Cure (1997). Charisma was screened in the "Directors Fortnight" section of the 1999 Cannes Film Festival and as a part of the director's spotlight at the 1999 Toronto International Film Festival. ~ Jonathan Crow, Rovi

The visual style of Kiyoshi Kurosawa's Charisma may be plain, and the premise may sound simple, but this film, as unnervingly calm as it is violent, concerns itself with huge eco-philosophical themes...

As a writer, I have always found Kiyoshi Kurosawa to lack focus. As a director, he is nothing short of brilliant. Here I'm starting to pick up, absorb and understand many of his visual choices, such as his constant filming of his actors in long shot. This is a quiet way of informing the audience that, despite their importance in the narrative at large, they are trivialized by the forces around them - in Pulse, the overwhelming crush of isolation and technological despair; here, the fulfillment of a depressing utilitarian philosophy, represented both through Koji Yakusho's failed policeman and Charisma, the tree that's poisoning all the other trees. Yakusho is small, just as society would have him belief, and it's none of their concern whether he lives or dies. Everything is meant to die someday. Or at least, that's what I distilled from the film. There are a lot of things going on in Charisma, many of which dead-end without any attempt at resolution or explanation. The sanitarium director's wife, the professor and her sister with the weird coat, and the mysterious militia with an unexplained need to cut down Charisma all fall by the wayside by the end of the film. I could make suppositions as to their purposes, but next to the overall theme of the film they feel unimportant and wasted. It's an uncomfortably familiar sensation in Kurosawa's films, almost all of which feel overstuffed and oddly thin at the same time (Pulse evades this, and Seance to a lesser extent).

There are some dangerous trees. He blew up one and it blew up the city??? I'm not really sure what the point of this movie was. I think it was suppose to be environmental but it was just confusing and not in a good way.