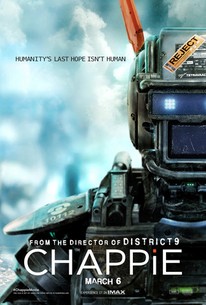 Critics Consensus: Chappie boasts more of the big ideas and visual panache that director Neill Blomkamp has become known for -- and, sadly, more of the narrative shortcomings.

Critics Consensus: Chappie boasts more of the big ideas and visual panache that director Neill Blomkamp has become known for -- and, sadly, more of the narrative shortcomings.

Critic Consensus: Chappie boasts more of the big ideas and visual panache that director Neill Blomkamp has become known for -- and, sadly, more of the narrative shortcomings.

In the near future, crime is patrolled by an oppressive mechanized police force. But now, the people are fighting back. When one police droid, Chappie, is stolen and given new programming, he becomes the first robot with the ability to think and feel for himself. As powerful, destructive forces start to see Chappie as a danger to mankind and order, they will stop at nothing to maintain the status quo and ensure that Chappie is the last of his kind. (C) Sony

Anderson Cooper
as Himself

Paul Hampshire
as Merc
View All

It's this time-old message of humanity, adapted to fit with today's technologies, that transcends the overpowering, at times clunky, cinematic vessel.

The principal charm of the film arises from Chappie's ears, which prick up and droop like those of a titanium rabbit.

Blomkamp's strength lies in his unabashed populism, an extension of his sympathy with the underdog.

While the visual effects are spectacularly seamless, they're in the service of a movie which devolves from vaguely funny to just-plain silly to numbingly gory.

There's material in Chappie for a worthwhile motion picture but too little is explored by Blomkamp to make this worth a trip to a theater.

Despite flashes of brilliance, Chappie's script often resembles a list of stuff that would be cool to see in a movie rather than an actual story.

Chappie packs a shocking climax into a movie which focuses on growth, humanity, and innocence.

Chappie needs one and all to leave practicality, a desire for authentic social statements, and distaste for over-the-top story and character at home. If you can't do that, stay home yourself.

Had it been more unhinged and odd or had it been dramatically less Die Antwoord-ly focused, Chappie could have been more than the haphazard hot mess it is.

Chappie is an amalgam of better movies.

Within Chappie, there is an almost perfect short film; an inventive take on a mechanical consciousness developing under unusual circumstances. If only the additional 100 minutes could have sustained this.

Neill Blomkamp films tend to tread on that future that is just beyond our reach. Looking at previous work, such as District 9, it could be a few months or decades into the future. The present is there, but the cusp of the next big thing exists. It may not be as bleak as some, but there still is a horrifying ingredient of the evil that men do. And yes, it is generally man that commits the heinous act. In Johannesburg, crime has spiraled out of control. As a reaction to the rise in illegal activities the police enlist the help of robotic officers. I know what you're thinking: Robocop. But that's not where this film goes. It's merely a cornerstone to the overall story, plus these robots are more agile than Robocop. Think about comparing an elephant to a jaguar. These machines are highly successful and leads their creator (Dev Patel) to obsessively work on a new program that defines consciousness. After "requisitioning" a unit that is going to the scrap heap as a test subject, the creator uploads his software and life begins for Chappie (Sharlto Copley), but not before he's taken by a group of criminals that had their eye on The Creator to turn off the robots so that they can commit crimes without their interference. The proceeding film follows Chappie as he quickly grows while be influenced not only by his environment, but the rules set down by The Creator. Obviously, you're feeling some Biblical references with The Creator and Chappie's struggle with following his orders and adapting to the environment he lives in, particularly the influence of Mommy and Daddy(Yolandi Visser and Ninja). There is a religious arc throughout the film as the character falls and rises again. There is a definite District 9 feel to the piece that harkens back to that fine film. I will warn you that if you're seeing this title thinking that it's a children's film, you will be sorely mistaken. This is far from it, even with the Short Circuitesque plot. Hugh jackman plays a nemesis that does things to our protagonist that goes way beyond the norm, more like torture, Steer kids away. Blomkamp has delivered another emotional rollercoaster film that encourages the viewer to think about our society right now, from the viewpoint of a possible future. It also delves into the idea of the meaning of life, but with a refreshing take. Chappie doesn't try to answer the question of what is the meaning of life, but it follows the process of an individual learning what that really is and that's really the whole essence of this film. Though it has some flaws, it's a fine film that delivers some introspection when least expected. ***1/2

After the refreshing "District 9" and the disappointing "Elysium" comes Blomkamp's third outing, "Chappie". Not much has changed, with the sci-fi elements and all, but my God, is this movie bad or what? Let's talk about the good before this review turns sour: Blomkamp has the privilege to cast Dev Patel and the Wolverine himself, Hugh Jackman in "Chappie" and they pull great performances like usual. With a great forefront cast like this, "Chappie" can't turn out too bad, right? But wait a minute -- this isn't their movie -- it's Ninja and Yolandi Visser's. The duo are marketed as the supporting cast when in fact, they're the face of the movie -- quite possibly even more so than the titular character, Chappie. And boy, what characters they play. They are, hands down, one of the most annoying characters in cinema history. The two are clearly presented as antagonists, always becoming a stumbling block for Dev Patel's character and always steering Chappie in a direction that is clearly destructive. But near the third act of the film, Blomkam forces viewers to have a change of heart, a different perspective, and feel empathy for these two characters when in fact, they have done absolutely nothing to prove otherwise. The duo continue to live a reckless life and have no regard to how much of an annoyance they are to Patel's future endeavors. Blomkamp does the worst possible sin that a filmmaker could make: force a view on viewers without any other choice. To boot, "Chappie" also has none of the spectacular action sequences "District 9" or "Elysium" had and it once again, has a preachy message. "Chappie" is one of the worst movies I've seen in quite sometime. The storytelling is sloppy with annoying characters and a confusing bait-and-switch that leaves viewers dissatisfied.

An instant classic. Director, Neil Blomkamp hits his mark the third time around with another brilliant sci-fi film that will truly compel you and blow you away. A true artist of the genre that just improves with every film. A spectacular and brilliant work of art. Like District 9 and Elysium you wil love this movie. Its powerful, exhilarating, heartfelt and action-packed. The special effects and the action are superb. A visually dazzling and deeply moving experience. Sharlto Copley is brilliant as Chappie, capturing his true child-like innocence and evolves beautifully as the film develops. Dev Patel is fantastic. High Jackman is terrific.