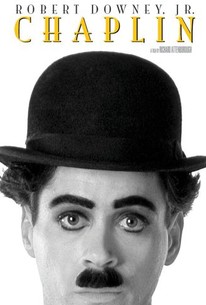 Critics Consensus: Chaplin boasts a terrific performance from Robert Downey, Jr. in the title role, but it isn't enough to overcome a formulaic biopic that pales in comparison to its subject's classic films.

Critics Consensus: Chaplin boasts a terrific performance from Robert Downey, Jr. in the title role, but it isn't enough to overcome a formulaic biopic that pales in comparison to its subject's classic films.

Critic Consensus: Chaplin boasts a terrific performance from Robert Downey, Jr. in the title role, but it isn't enough to overcome a formulaic biopic that pales in comparison to its subject's classic films.

Robert Downey, Jr. gained widespread praise for his uncanny performance as the legendary Charlie Chaplin in this otherwise disappointing biography. Told in flashback, the film consists of Chaplin's responses to questioning by fictional publisher George Hayden, who wants to know about the parts left out of the legend's autobiographical book.

Graham Sinclair
as Master of Ceremonies

William Hunt
as US Maitre D'

Yoshio Be
as Chauffeur

Robert Stephens
as Ted the Drunk

Michael B. Miller
as Reporter

With this reverential biopic, director Richard Attenborough has cranked out a many-reel, talky talkie.

A lot of loving care (but not much thought) went into this white elephant, and considering how fascinating a figure Chaplin is it's never exactly boring, but your time would be much better spent looking at any of Chaplin's pictures.

It's slick packaging around what is mostly warm air.

The thrill of the ending, with real Chaplin film clips, only exposes the rest as a soporific.

It's a monumental biopic that cheapens the hero's successes by glossing over the failures that surely also shaped the man.

The decades haven't erased the sense that "the longer it goes on, the worse it gets."

What is stunningly good about Chaplin, despite the script, is the central performance by Robert Downey Jr.

Downey has a perfect ear for the Chaplin accent, the way it climbed from Cockney to minced posh, and a perfect boot and fist for the slapstick; the one thing he doesn't have is an eye on his own brilliance.

Might be of interest to fans of the great comic, but as entertainment it ultimately fails.

A stupendous biopic centered on the life of the perfectionist genius obsessed with his work that was Charles Chaplin, and it boasts a spectacular production design, a marvelous script, a beautiful score and Robert Downey Jr. in one of his most amazing performances.

Robert Downey jr. brings Charlie Chaplin to life in this near flawless biopic, Chaplin. Chaplin tells the story of the first Hollywood icon, Charlie Chaplin. Robert Downey jr. delivers as the famed actor. He gives a stunning, perfect performance of this icon of cinema. Chaplin is one of the best biopics I've seen in quite some time. There is a good mix of humor and drama in this story. The film recounts some of the greatest moments in Charlie Chaplin's life, such as his debut in silent films, the release of his legendary The Great Dictator and his welcomed return to Hollywood. Chaplin is a well crafted biopic that has superb performances. I thought that this was a terrific film, and I don't understand why the film has gotten so much criticism. I felt like this was a great film that really captured the essence of this troubled genius. This film is another example as to why film critics are wrong. Downey Jr's performance was flawless and he really delivered something special on-screen. You looked at him, and you saw Charlie Chaplin. If you're looking for a terrific biopic, Chaplin is the one. I've seen many films based on the lives of famous people, and Chaplin is one of the better biopics around. This is a brilliant film that really delivers something great for the viewer. I thoroughly enjoyed this film, and I'm sure every die-hard Charlie Chaplin fan will enjoy Robert Downey jr.'s performance as the Little Tramp. A wonderful picture.

Not a huge success upon release and I'm not really sure why as this lavish epic is thoroughly interesting, charming and well made. Taken a from a point of narration by Chaplin during an interview with a fictional character played by Hopkins the film simply takes you through Chaplin's life from one event to another although with many gaps. I'm not completely up with the life of Charlie but I have read that the film does take artistic license with the truth and of course skips allot of history. This really can't be faulted as my personal view from someone who knows very little about his life is 'does that matter?' The film shows much of his upbringing from the dirty streets of Victorian London to his first jobs in the US, his breaking through into the business, becoming rich and world famous and his problems upon returning to the UK after the the first World War. Most of his big films are also covered in the bio and show just how much swing he had during his reign, the issue he had with controversial ideas and how his close friendships with top stars of the time like Doug Fairbanks helped him. The film looks excellent in every sense and every scene but clearly the main attraction is Downey Jr and his portrayal of Chaplin. Not only does he genuinely look like Charlie but he manages to mimic the moves, walk, facial expressions and even the comedic slapstick Charlie amazed us with in his movies. To watch Downey making the classic films within the main film you would actually think Chaplin was still alive today starring in his own bio, amazing work to get it right. Other cast members all add to the superb film both in their looks and portrayals, an amazing line up of known stars from both the US and the UK ranging from Dan Aykroyd to Diane Lane to John Thaw to Milla Jovovich. Kevin Kline is probably one of the better casting choices as he really does seem to belong in that kind of era, born at the wrong time methinks hehe and his lovely showcase as Fairbanks shows this. As with any film of this nature some sequences are maybe over the top and heavy handed to create that teary eyed emotion but I guess that is to be expected and required to a degree. Never the less a worthy film from Attenborough that has been forgotten and easily sits in the top twenty of all time bio pics.

As a huge admirer of Charlie Chaplin, I had high hopes in finally seeing Richard Attenborough's controversial biopic about the comedic legend. The film definitely tries to cover as much ground as it can (It begins when Charlie is 5 in a London music hall and plows through the rest of his life, ending shortly before his death in Vevey, Switzerland, on Christmas Day 1977, at the age of 88) but in doing so abandons depth and development -- so much so that the film inevitably feels like a bunch of glossy broad strokes. Though slow of pace, it is so hurried that the best it can do to cover the material is to identify significant characters and eras and keep moving. That being said, Chaplin does feature two great surprises: The first is Robert Downey Jr. He is good and persuasive as the adult Charlie when the material allows, and close to brilliant when he does some of Charlie's early vaudeville and film sketches. His slapstick routines are graceful, witty and, most important, funny. The other surprise is Geraldine Chaplin, Chaplin's eldest child by his last wife, Oona O'Neill. She's splendid playing her own grandmother, Hannah Chaplin, whose slide into madness provides the movie with its only emotional weight. The film plays rather like the autobiography: windy, courtly, full of names and dates but never terribly revealing about either the film maker's life or his art. Sadly, if you're like me, and are pretty familiar with his life and work, you won't learn anything new or gain any new insight here. In view of the fact that the autobiography was harshly criticized for its superficiality, the narrative device employed by the screenplay is so idiotic as to seem self-destructive. The conceit used to introduce the film's flashbacks is to have the aging Charlie, while working on the book in Vevey, discussing the manuscript with his editor, a fictional character named George Hayden (Anthony Hopkins). It's as if George had already had a peek at the book's reviews. He's likely to say something like: "Charlie, you haven't told us much about your father. Why is that?" To which Charlie might say, "I didn't like him." End of topic. Or, "Tell me, Charlie, when did you actually start work on 'The Great Dictator'?," which serves to introduce a quick clip that demonstrates not much of anything. It's merely a reminder of what the audience is missing. At one point in the film, Downey says, "If you want to learn about me, watch my movies." Sadly, I'd probably give the same advice to anyone who was interested in watching this film. You'll learn more about him through watching his illustrious canon than you will watching this biopic -- and that, unfortunately, is an opportunity missed.