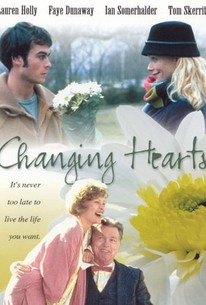 A shared affliction -- namely, breast cancer -- forges an unlikely friendship between two Southern women, ebullient young Amber Collins (Lauren Holly) and crabby, reclusive oldster Betty Miller (Faye Dunaway). As they join forces to battle and cope with their disease, Amber and Betty also end up helping one another with their respective romantic entanglements. Tom Skerritt is cast as Betty's faithless former flame, Johnny Pinkley (now the self-styled Lothario of a nursing home), while Ian Somerhalder plays Amber's troubled -- and much younger -- amour Jason Kelly. Daniel Wright adapted the script of this independently produced movie from his own award-winning play +Colored Eggs (the film's working title), retaining the original's sizeable supporting cast of lovable eccentrics. Decked out with musical highlights by Rita Coolidge, Earl and Randy Scruggs, Jan Howard, and Jeannie Seely, Changing Hearts was given scattered theatrical release in 2002 before it was picked up for TV play by the Lifetime cable network.

There are no critic reviews yet for Changing Hearts. Keep checking Rotten Tomatoes for updates!

starring Ian Somerhalder (Jason) , Faye Dunaway(betty) & Lauren Holly (as Amber) This Dramady (Drama with a touchof comedy thrown in) about an unhappy orderly (Ian Somerhalder) who works in a Cancer rehab center. Jason hangs around for his next assignment, who turns out to be Amber, who in turn helps him for the better. Was getting abit bored in parts, but love the crazy old guy & was RLLING when Ian was doing that crazy dance Amber came up with. A heart warming (but at the same time sad story C