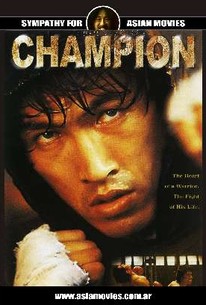 Kwak Kyung-taek's Champion is a biopic of Korean boxer Kim Deuk-gu. The film opens at Kim's fateful final fight against Ray Mancini, but almost immediately flashes back to Kim's difficult childhood. As he goes from one menial job to another, Kim learns how to fight. He strikes up a relationship with Lee Kyeong-mi (Chae Min-seo), but her father does not want his daughter involved with a boxer. Kim falls into a coma after the bout with Mancini. The film concludes with a segment about Kim's son and his life over a decade after the fight occurred. Champion was screened at the Toronto Film Festival.

There are no critic reviews yet for Champion. Keep checking Rotten Tomatoes for updates!

I do love a good boxing movie! Even though this movie didn't seem to have the biggest budget, I think that they did a really decent job. I didn't know anything about this particular boxer until this movie, so I went in blind....and found myself in complete suspense the last 45 min, or so. Enjoyable, memorable, and inspiring Korean film.