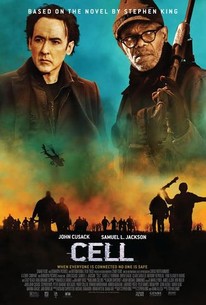 Stephen King's best-selling novel is brought to terrifying life in this mind-blowing thriller starring John Cusack and Samuel L. Jackson. At the Boston airport, Clay (Cusack) witnesses a scene of chaotic mayhem when an electronic signal turns hundreds of cell phone users into rabid killers. Desperate to find his estranged wife and son, Clay teams with a train driver (Jackson) to battle the horde of murderous "phoners" as the city descends into apocalyptic madness.

The Secret Life of Pets Is Funny and Colorful

This is the undead equivalent of fast food. Some might find comfort in all these known quantities. Those looking for anything of substance would do better to wait for an upgrade.

Cusack and Jackson aren't on their finest acting form, and this is one to forget.

The concept of humankind turning into one enormous mobile hotspot for use by an evil mastermind has legs. It's too bad Cell cuts the idea off at the knees.

This is just painful to watch and review. [Full review in Spanish].

As a commentary on today's world where most of us are in a zombie-like state staring at our electronic devices instead of interacting with those around us, Cell is a meaningful look at what we as a society have become.

Creepy at the best of times. Plenty of flaws to boot and there are definitely lacklustre performances out of Cusack and Jackson, which is unfortunate.

There is nothing to see here which can't be found done much better by countless other bad films which put Cell to shame.

An incoherent and disjointed festival of nonsense.

Predictable in a lot of places, but all concerned wisely play things for knowing laughs when the occasion demands (and it often does) and Cusack and Jackson make a grand pairing.

Having never read the book I'm rating it as just a film and it's really a film that starts well then gets predictable then got silly and confusing, The story was not new but it had a different take on it, It wasn't acted very well but it had some good intense scenes that were done well, With a good cast the story should of been told more deeper and we never really know how it all started which was quite annoying, I did like the ending but the scenes before that completely ruined the film as they didn't make sense or were done that well, It's not a bad film it's just poor for what was on offer.

Well, how about that - there's lots of interesting stuff here. I should always remember to heed the advice of messers Mark Kermode and Kim Newman and pay less attention to the Rotten Tomatoes score. Cell's biggest issue is it's obviously meagre budget vs it's ambition and ideas. It's a very weird film, with some strange, funny moments and some surprisingly moments of levity and beauty. It has the same essence of the Stephen King book but is also radically different (it's its own thing). Colour me surprised. I enjoyed Cell, quite a bit.

In this corner, Stephen King, perhaps America's premier horror writer. And in the other, zombies, America's favorite horror genre of the moment. Put these two together and there's gonna be some major sparks, baby, or at least that's what you'd think. Maybe it's what Stephen thought when he put this together. Or maybe it's what somebody, maybe his agent or his manager, told him. Whatever the case, it just doesn't happen, the premise not jelled enough at the source. And even though Cusack and Jackson have good chemistry together (they' ve done the Stephen King thing before, and swimmingly, 1408), there's not enough good chem in the world to make this clunker click. Oh well.