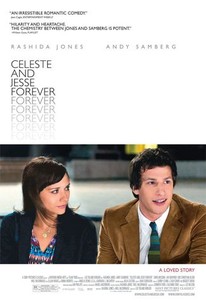 Critics Consensus: While it doesn't subvert the genre as incisively as it thinks it does, Celeste and Jesse Forever is a shrewd rom-com that benefits from its likable cast and trumpets the arrival of Rashida Jones as a bona fide big screen talent.

Critics Consensus: While it doesn't subvert the genre as incisively as it thinks it does, Celeste and Jesse Forever is a shrewd rom-com that benefits from its likable cast and trumpets the arrival of Rashida Jones as a bona fide big screen talent.

Critic Consensus: While it doesn't subvert the genre as incisively as it thinks it does, Celeste and Jesse Forever is a shrewd rom-com that benefits from its likable cast and trumpets the arrival of Rashida Jones as a bona fide big screen talent.

Celeste (Rashida Jones) and Jesse (Andy Samberg) met in high school, married young and are growing apart. Now thirty, Celeste is the driven owner of her own media consulting firm, Jesse is once again unemployed and in no particular rush to do anything with his life. Celeste is convinced that divorcing Jesse is the right thing to do -- she is on her way up, he is on his way nowhere, and if they do it now instead of later, they can remain supportive friends. Jesse passively accepts this transition into friendship, even though he is still in love with her. As the reality of their separation sets in, Celeste slowly and painfully realizes she has been cavalier about their relationship, and her decision, which once seemed mature and progressive, now seems impulsive and selfish. But her timing with Jesse is less than fortuitous... -- (C) Sony Classics

Will McCormack
as Skillz

Shira Lazar
as Herself

Matthias Steiner
as Himself

Charming and not without its moments, but far too conventional to capture the complexity it strives for.

There are some nice moments, but it's unbearably self-conscious and nowhere does it resemble real life.

There is quiet, seditious verve to the way expectations are derailed and then re-railed, just as in those areas of real life that still exist even outside the expanding Sundance empire of middlebrow observationalism.

Finally, there's something a little sketchy about the movie, a little unfinished and scattergun. The figure of Jesse recedes in importance, and it's Celeste whose delusions we focus on.

...much like the work of writer/director Alexander Payne, Lee Toland Krieger's Celeste and Jesse Forever, harnesses the heart while observing the absurd with outstanding results.

Doesn't seem to know how to be the film it so desperately wants to be.

A fun spin on the romantic comedy that features some very likable leads and a very smart screenplay. It's a bit unconventional but really entertaining.

The film feels as if it's captured something very real even if it's done so in fairly superficial way.

Celeste and Jesse isn't looking to wow you; it's just looking to charm (sweetest breakup comedy ever?).

An enjoyable rom-com that finds itself smarter and more insightful than it really is, but still it benefits from a great chemistry between the adorable leads - and Jones proves that she is quite talented enough to carry a film on her shoulders.

There are very few romantic dramedies that grab my attention, even though I love that genre. There are just not that many great films that come from it. Again, it's not the best in it's genre, but "Celeste and Jesse Forever" is an enjoyable enough movie, due to it's performances by Andy Samberg and Rashida Jones. They are great together and for once, Andy Samberg was not annoying in any way. I really liked their chemistry and where the story took them, whether it be apart or together by the end, that really didn't matter to me, because the film played out very naturally. It is well-written and has a very sweet sentimental tone under it. I am a huge fan of indie films, mainly because that is where the creative minds are these days. There is a great movie in here somewhere for sure, but I feel like there was a bit of wasted potential and the movie has too broad of an ending for my liking. Overall, I really enjoyed it, but many things bugged me.

Not bad. Not one to watch over and over, but good for a one off watch.

Wanted to really like this, but the longer I sat through it, the more I wondered why the audience is supposed to care about, and invest the time in, this couple's story. I didn't find it funny, or sweet. I found this script weak. Not a terrible movie, just nothing that I would recommend to anyone.