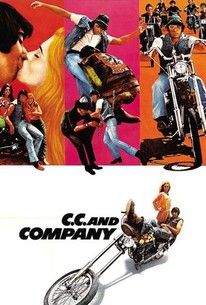 C.C. Ryder (Joe Namath) is a biker who rescues Ann McCalley (Ann-Margret) from a rape attempt by a gang of malevolent hippies. She makes love with him to show her appreciation, but their romance meets with obstacles when gang-leader Moon (William Smith) seeks revenge for C.C.'s interference. They battle for control over both the gang and Ann in this truly bad biker movie. Namath was chosen because of his hero status as a football player in the 1970 Super-Bowl upset by the New York Jets over the highly favored Baltimore Colts. Brash Broadway Joe predicted a win and made sure it was not an idle boast. One of the producers of this dog was Margret's husband Roger Smith which explains her appearance in this forgettable film.

Wayne Cochran and the C.C. Riders
as Group cast appearance
View All

In one scene a man points to Namath and says "...that's what gives motorcycling a bad name." So do movies like this one.

There are no featured audience reviews yet. Click the link below to see what others say about C.C. & Company!