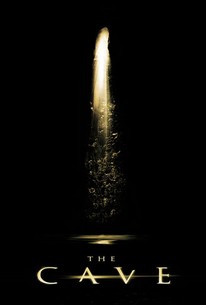 Critics Consensus: Despite its stylized and impressive sets, this horror-monster movie mish-mash suffers from endless cliches and wildly implausible plotlines.

Critics Consensus: Despite its stylized and impressive sets, this horror-monster movie mish-mash suffers from endless cliches and wildly implausible plotlines.

Critic Consensus: Despite its stylized and impressive sets, this horror-monster movie mish-mash suffers from endless cliches and wildly implausible plotlines.

Terror lurks deep beneath the surface of the Earth in this thriller. While on a dig in a Romanian forest, a group of scientists make a startling find -- they find a huge abbey, dating back to the 13th Century, which was built over the entrance to a massive network of subterranean caves. Eager to learn what lurks within the caves, the scientists discover to their peril that a large part of the cave system is under water. Undeterred, the remaining scientists hire a team of American spelunkers who are trained in exploring underwater caves, led by brothers Jack (Cole Hauser) and Tyler (Eddie Cibrian). Armed with new high-tech SCUBA gear that allows them to stay under water for a full 24 hours, Jack, Tyler, and the rest of their crew dive in to investigate the caves, but a mishap traps them in a cavern beneath the surface, and they soon discover they are not alone, as strange and bloodthirsty creatures make their presence known. The Cave also stars Morris Chestnut, Rick Ravanello, Piper Perabo, and Lena Headey.

News & Interviews for The Cave

View All The Cave News

Critic Reviews for The Cave

A generic duffer that's as exciting as a hole in the ground.

Fright-wise, The Cave is a dry hole.

Spare and single-minded, The Cave is an insistently entertaining piece of pulp.

The Cave isn't just a bad movie, it's a very, very, very bad movie, so bad that it can't even redeem itself by turning into high camp.

Feels stunningly familiar as it goes through the rote edicts of the scientific crew vs. toothy beastie formula.

Somewhere deep beneath the Carpathian mountains, something unholy stirs: It's an unspeakable stinker of a movie called The Cave.

The Cave is a decently crafted but unoriginal and uninspiring creature feature with a few moments of true entertainment that the rest of the film never matches up to.

Replete with winged undersea cave monsters, unlikely mountain climbing heroics and a mutating microbe that turns its victims into creatures-in-waiting "The Cave" is a paint-by-numbers thriller lacking in pigment.

About what you'd expect from a low budget, B-movie destined to reside among the direct-to-video releases at Blockbuster and the Saturday night features on the Sci-Fi Channel.

Audience Reviews for The Cave

If you're into caving and diving, you might get a slight kick out of this. If you're not, then don't bother.

An intrepid group of underground, underwater cave explorers try their hand in Romania (Dracula territory, a tip off), where they've found a new cave, under a mountain, under a church, and discover that they are in turn discovered by flesh eating monstrosities. Claustrophobic spaces, lots of uber-dark, and a music score from Psycho does not prevent science types from wandering off on their own (" hello, don't worry, I'm a doctor, highly trained, did you hear that noise, I'll go by myself to check it out w/this flashlight that don't work and no weapons even though I know something's out there killing us all off ...") one by one ... and the result is predictable movie horror cliches.

I quite like this movie ive seen it a few times now and although its certainly not the scariest nor the most fantastic storyline it certaily doesnt promise anything that it cant deliver! Its entertaining enough and kept me thoroughly entertained throughout!

I view The Cave as a bad rip-off of the superior British horror film, The Descent. The Cave basically follows the exact same path, except its a lot less inspired. The film is so not inspired that it's ridiculously stupid with actors who over do it, and they try to create something horrifying and tense on screen. If you've seen The Descent, you've seen this one. A badly acted film riddled with clichés from every possible horror film. I thought that this film was a pure waste of time because it didn't do anything good with its plot. The film relied on clichés the whole time, and the film was predictable. The horror was so poorly done that it was laughable. I thought that it was one of the films biggest flaws, aside from the terrible acting from the "actors". The film had no effective atmosphere, and thus it killed the feel of the overall film. The Descent was genuinely frightening, but this is laughable. The performances were terrible too. I had a hard time with the awful acting, and I really didn't care who lived or died in the film. I just thought this was a pointless attempt at horror and it was terrible. This is one of the worst horror films that I had the misfortune of seeing. This is a bad horror film plain and simple, and it doesn't have anything interesting going on, on screen. This recycles old ideas that we've seen from previous horror films, and it's nothing exciting or interesting for that matter. Just a film to steal your money away.