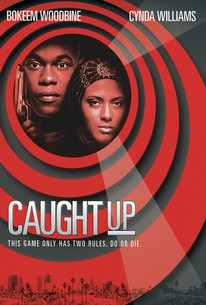 Darin Scott made his directorial debut with this neo-noir crime drama set in South Central L.A. and featuring Cynda Williams in a dual role. Back in L.A. after serving time on drug charges, Daryl Allen (Bokeem Woodbine), who narrates, plans to open a nightclub, and a pal offers to bankroll the business. Daryl drives his buddy to the bank, unaware he's taking part in a robbery. He's sent back to the slammer for a long stretch, and during that period his girlfriend (Cynda Williams) marries. Released after five years, Daryl is unemployed when he meets Vanessa Dietrich (Williams), who gets him work as a limo driver. Vanessa and Daryl are targets of a hitman, and Vanessa tells Daryl she suspects her ex-lover Ahmad (Basil Wallace). What Daryl doesn't know about Ahmad and Vanessa may turn out to be his undoing.

Critic Reviews for Caught Up

Scott is ambitious and not without talent, but he ought to ration his material a little; there's so much plot it's dizzying.

Is it a hood flick? A horror movie? A romantic drama? How about all three. None of 'em good.

Audience Reviews for Caught Up

There are no featured audience reviews yet. Click the link below to see what others say about Caught Up!