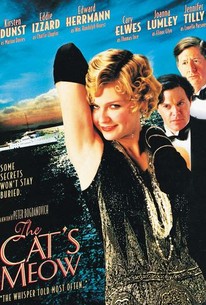 Critics Consensus: The Cat's Meow is a deliciously evoked period piece and whodunit.

Critics Consensus: The Cat's Meow is a deliciously evoked period piece and whodunit.

Critic Consensus: The Cat's Meow is a deliciously evoked period piece and whodunit.

The year is 1924 and billionaire publisher William Randolph Hearst (Edward Hermann) has arranged a birthday cruise aboard his yacht, Oneida, for financially distressed film pioneer Thomas H. Ince (Cary Elwes). But trouble is in the air, for among the guests is Charlie Chaplin (Eddie Izzard), who intends to steal Hearst's mistress, the actress Marion Davies (Kirsten Dunst), right from under his nose. As the Oneida sails into the deep waters of the Pacific, the jealous Hearst struggles to suppress murderous thoughts amid unfettered merrymaking and the propositioning of gold diggers. When Ince discovers a love letter from Chaplin, he believes it is the key to a golden future in Hearst's production company, Cosmopolitan Pictures; but revealing the document leads to an unfathomable tragedy. Based on a true incident once related to director Peter Bogdanovich by Orson Welles, this story was originally intended as part of Citizen Kane but was eventually omitted from the landmark film.

Critic Reviews for The Cat's Meow

The strongest achievement of The Cat's Meow may be the performances, especially those of Kirsten Dunst (Davies), Edward Herrmann (Hearst), and even Eddie Izzard (Chaplin).

The '20s-set pic is given considerable bounce by a splendid cast, led by Kirsten Dunst in an eye-opening perf as Marion Davies.

It''s still a tasty footnote in the chequered histories of both Chaplin -- rumoured to be Davies' secret lover -- and Hearst.

The chemistry between the three leads is a cruel and perfect satire on celebrity love.

As the story progresses, the tension dissipates, probably because once Bogdanovich has set his wheels in motion, he just lets them spin.

The Cat's Meow is a spiky, if unexciting return to form for Bogdanovich.

...a missed opportunity that's rarely as engrossing or intriguing as its premise might have indicated.

It's good to see Peter Bogdanovich working again, but his Hollywood tale feels like a minor, trashy TV melodrama

This story about a possible murder isn't for kids.

Though The Cat's Meow just sorta comes to a so-what ending and stops short, the getting there is delicious.

I thought this was an incredible cast and I thought they were all fantastic at bringing their characters to life.

Audience Reviews for The Cat's Meow

Went for it just because it's based on true events. Turns out it's based on rumors. No problem. Was surprised to learn that Chaplin was so scandalous. The story was not so so-so, but the performances and casting were. Historically, if the given version is correct, it's quite significant in depicting the height of corruption. As to me, I really don't know. If he's shot, why didn't anyone come forward even after Hearst's death? If he wasn't, why the characters involved got a promotion soon after it. It surely was given a touch of a cover up. The movie doesn't tend to explain it, it simply presents (modification of) one of the versions of this mysterious event. Could have been way better.

Gawd this is a boring film. Hearst and Chaplin were probably rolling over in their graves at their portrayals in this film. Neither of them were particularly interesting to hang out with. Kirsten Dunst portrays annoying as no one else can.

Quirky and entertaining, The Cat's Meow is a captivating period film about a fascinating piece of Hollywood lore. Inspired by true events and based on a play, the story attempts to unravel a notorious Hollywood murder that supposedly occurred aboard the yacht of wealthy media tycoon William Randolph Hearst in 1924. Kirsten Dunst, Edward Herrmann, Eddie Izzard, and Cary Elwes form a solid cast and give good performances. Additionally, the makeup and costumes are especially well-done, and give an authentic look and feel to the film. However, the storytelling is poor and gets a little lost in itself. The Cat's Meow is an intriguing murder mystery, but there are some problems with the execution.