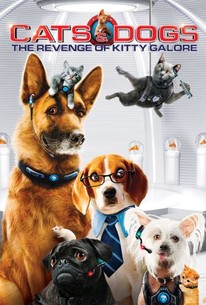 The epic struggle for control of planet Earth continues in this sequel to the 2001 comedy that confirmed everyone's worst suspicions about our furry four-legged companions. A former top spy for the clandestine feline espionage bureau MEOWS, Kitty Galore is determined to rule the world and finally gain the upper paw over her canine rivals. But when an unforeseen threat appears, cats and dogs must band together to defeat a common foe. Chris O'Donnell and 30 Rock's Jack McBrayer head up the cast of the production, with scripting duties being handled by Brother Bear's Ron J. Friedman and Steve Bencich. ~ Jason Buchanan, Rovi

News & Interviews for Cats & Dogs: The Revenge of Kitty Galore

View All Cats & Dogs: The Revenge of Kitty Galore News

Critic Reviews for Cats & Dogs: The Revenge of Kitty Galore

There are just enough effects-driven laughs but a bit too much talky dead space in this not-at-all-anticipated sequel to the tepid, poorly animated 2001 film.

For comedy value there is little to choose between the expensive antics here and the primitive spy charade enacted by apes in the 1970s TV series Lancelot Link: Secret Chimp.

The Revenge of Kitty Galore (in 3D) is loud, colourful and silly enough to tickle the 5- to 10-year-old target group, but only for about half its length.

It's beneath any cat to be sprayed repeatedly with a water bottle, or completely shaved, let alone dubbed by Bette Midler.

Winds its way towards its conclusion with scant imagination, except in a purely technical sense.

Not even an exceedingly cute beagle in a roll-neck pullover and spectacles can rescue this charmless live-action and 3D animated kids' caper.

The story is where this movie falls apart from a grown-up's view. It's got an overwritten script that seems like it's been churned out of a weekend screenwriting course.

And, dare I say it, Cats & Dogs: TROKG is a well-made parody film, sinking its canines into spy genre cliches with gleeful abandon, in a way that its predecessor never quite did.

The action is cute, to be sure, but the cuteness wore off quickly for this adult.

I think young children will enjoy the movie very much, while adults will probably opt to go out into the kitchen and wash dishes while the tykes watch it.

Joseph Proimakis
Movies for the Masses
View All Critic Reviews (98)

Audience Reviews for Cats & Dogs: The Revenge of Kitty Galore

The action is cute, to be sure, but the cuteness wore off quickly for this adult.

It really is just for kids. I'm all for talking animals, but this was a bit much. I only watched it because I was stuck on an 11 hour flight.

Mildly entertaining for a dumb action kids movie. I enjoyed the first one much more than this. Some funny parts, but didn't work for me(although I may have the mindset of a child, I'm not 5 anymore :-p ) If you want to watch talking dogs get either the first one or "Marmaduke," both much better. Heck, even "G-Force" was better than this.