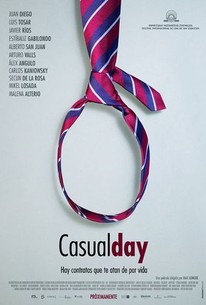 An clever but somewhat aimless twenty-five year old finds a weekend trip to the country suddenly threatening to determine the outcome of his entire life in the sophomore feature from Spanish filmmaker Max Lemcke. Imported to Spain from the USA, Casual Day is a company practice in which the employer tries to improve interpersonal relationships among employees and improve performance by allowing them to exchange their suits for casual attire on the last day of the work week. Some companies even go so far as to organize day trips or other less conventional activities to help keep morale high. Up to this point in his life, Ruy has never really had to answer to anyone; now it appears that those carefree days might be nearing an end. Ruy's girlfriend's father José has hand selected the quick thinking twenty-five year old for the most important job in the whole company. Retirement is drawing near for José, and when that day finally comes he wants Ruy to take over the business. But despite the fact that Ruy isn't sure he's ready to accept that kind of responsibility at this point in his life, rejecting José's offer could jeopardize his relationship with his devoted girlfriend Inéz and perhaps his entire future. Now, as Ruy and his co-workers board the bus for what was supposed to be a simple trip into the country, the crushing weight of responsibility suddenly turns a carefree outing into a monumental exercise in life decision-making. ~ Jason Buchanan, Rovi

There are no critic reviews yet for Casual Day. Keep checking Rotten Tomatoes for updates!

There are no featured reviews for Casual Day at this time.