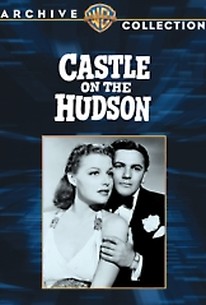 Castle on the Hudson Photos

In this remake of the classic prison story 20,000 Years in Sing-Sing, John Garfield plays Tommy Gordon, a jewel thief who has been sent up the river for a minimum of 25 years. Tommy isn't especially worried about prison, as he's convinced his well-connected friends will help him get out before long. But Tommy learns the hard way his friends aren't as helpful as he imagined, and he regrets causing so much trouble for reform-minded warden Walter Long (Pat O'Brien), who he comes to regard as a friend and ally. Tommy's girlfriend, Kay Manners (Ann Sheridan), is desperate to get him out of prison and enlists the help of shifty lawyer Ed Crowley (Jerome Cowan); however, when Crowley tries to extract a payment from Kay that has nothing to do with money, she puts up a fight and ends up seriously hurt. Long shows his sympathetic side by granting Tommy a pass to visit Kay, but when he arrives at her home, he discovers Crowley has also arrived to see her. A scuffle ensues, and Kay shoots Crowley. Rather than see her go to jail, Tommy takes the blame, but soon goes on the lam, betraying Long's trust. ~ Mark Deming, Rovi

Eddie Acuff
as Bill the Clerk

Frank Faylen
as Guard who is slugged

Philip Morris
as Joe, Detective in New York
View All

Critic Reviews for Castle on the Hudson

There are no critic reviews yet for Castle on the Hudson. Keep checking Rotten Tomatoes for updates!

Audience Reviews for Castle on the Hudson

Efficiently directed but the story is nothing that hasn't been done many times before. Garfield makes it worth seeing.

Castle on the Hudson Quotes