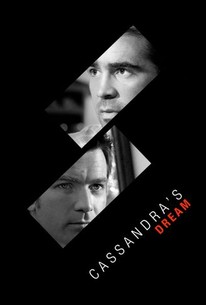 Critics Consensus: Colin Farrell and Tom Wilkinson act up a storm in Cassandra's Dream, but Woody Allen's heavy-handed symbolism and foreshadowing drains the plot of all tension.

Critics Consensus: Colin Farrell and Tom Wilkinson act up a storm in Cassandra's Dream, but Woody Allen's heavy-handed symbolism and foreshadowing drains the plot of all tension.

Critic Consensus: Colin Farrell and Tom Wilkinson act up a storm in Cassandra's Dream, but Woody Allen's heavy-handed symbolism and foreshadowing drains the plot of all tension.

Two brothers with serious financial woes are approached by a third party to commit a crime, but things go bad and the brothers become enemies.

Hugh Rathbone
as Poker Player No.1

Allan Ramsey
as Poker Player No.2

Franck Viano
as Poker Player No.5

Tommy Mack
as Poker Player No.6

Milo Bodrozic
as Poker Player No.7

Richard Graham
as Detective No.1

Ross Boatman
as Detective No.2

Farrell and McGregor bring much to their roles...to make Cassandra's Dream an effective and chilling ride.

It's enough to make you pine for the good old days -- back when life was only partly ironic and Woody was totally funny.

Woody Allen still insists on making movies at the rate of one a year, but he clearly needs to slow down. A lot.

The problem is, you don't feel the human sweat and strain in Cassandra's Dream, despite game work from Farrell and McGregor. There are plenty of ideas and themes and no people of distinctive interest to enliven them.

Allen is notorious for not giving his actors explicit instructions, and yet somehow this worked wonders for Farrell, who has never seemed so naked, so clear and so unencumbered as he does here.

It's not Dostoyevsky, but neither is it a shopworn trifle. It is, if you will excuse the literary metaphor, a good read.

By no means is this lukewarm drama Woody Allen's worst work, but it's no dream, either.

Everything is utterly disengaged

Cassandra's Dream is, in fact, not the worst film in the Woodman's oeuvre. But it does tend to underline his weaknesses.

At this point, I guess we should just applaud Allen for his work ethic.

If Woody Allen was trying to capture the magic of his dark crime drama Match Point once again, he sure didn't do it here. That's a shame too, because this had a lot of potential. The film follows two cash strapped brothers played by Ewan McGregor and Colin Farrell who agree to kill a business associate for their wealthy uncle played by the always reliable class act Tom Wilkinson. There's also love going on as well, with Hayley Atwell being the main attraction for McGregor. Though she got major exposure later in Captain America: The First Avenger, she proves quite appealing here, too. The main plot wouldn't be so bad had this not been released around the same time as Sidney Lumet's Before the Devil Knows You're Dead- a much similar, but far superior crime thriller. Also, though the film skirts around it, it ultimately fails to live up to the hope of fully incorporating the ideas from the folklore figure Cassandra the ignored doomsayer. The film is shot extremely well, looks gorgeous, and has some great music, and, while it is fun to see the two male leads interact, none of the performers really bring their A game, and that includes Allen. The lack of heart and soul to the proceedings is quite obvious, and ultimately this comes off as less of an earnest effort and more of just something Allen made just to fulfill his pattern of releasing at least one film a year.

I have never been a fan of Woody Allen films, but the last couple that I have seen have surprised me...I can actually say that I have liked them. Hmmmm. Go figure. I have noticed, however, that fans of Woody Allen films have not. Maybe this is a new era for him. Hope so...This movie has some great acting, especially from Colin Farrell, and a decent storyline. Reminds me of a Hitchcock type of film.

I don't remember anything about this movie and I watched it about a month ago so I guess that's all that needs saying about it.

A definite Woody Allen dog, it's no wonder why this one was pronounced D.O.A. Perhaps the rustiest nail in the coffin is an abysmal performance by Colin Farrell, cast correctly but totally unfocused. I don't know if he was embroiled in the throes of his well-known cocaine habit or what, but he seems glassy-eyed and inexpressive here, just barely coming to life by the melodramatic ending. It doesn't exactly help that his character has exactly three lines ("I like to gamble," "we shouldn't do this," "we shouldn't have done that"), but watching him made the movie a totally difficult sell for me. Ewan McGregor isn't offensive, and I'll watch any movie where he whips out the tits, but he isn't exactly bringing much to the table either as a listless intellectual. Though his performance is adequate, there really isn't any interesting ground for him to cover. Finally, Hayley Atwell, who I'm guessing was an aborted Woody Allen muse in the making, is pretty awful herself. No surprises as to why her career vanished like it did, as her presence is broad and easy and she lays her character flat in about thirty seconds, though that may also be the script cheapening her. I know these characters are not supposed to be sympathetic, but instead of wanting to slap them and yell some sense into them, I really just wanted to shut the movie off. My frustration was outside this insular, dull universe Allen had created. The two figures who emerge unscathed are Sally Hawkins, luminous and heartbreaking as Farrell's trivialized girlfriend, and Tom Wilkinson, who is chewing the scenery but at least he's doing something. It becomes tragically clear who the real actors in the cast are and who's just along for the ride. Actors aside, there's not much they could have done for this ridiculously pat morality play, where absolutely nothing worth noting is going on except Philip Glass' cool score. The movie strings you along on generic conflict after generic conflict, when finally it decides that an end has been reached and it sweeps everything under the rug in a mostly hilarious fashion. Not only is it rushed, but it's a complete and total dud. Unless you're an absolute Allen diehard, there's no reason to see Cassandra's Dream if you've seen a heist flick or something more complicated than Transformers 2 in the last five years.