Casino Jack And The United States Of Money2010

Casino Jack And The United States Of Money (2010) 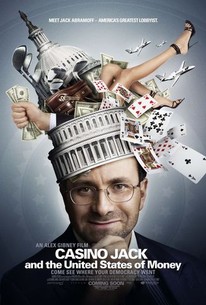 Critics Consensus: Casino Jack's subject matter is enraging, but in the hands of director Alex Gibney, it's also well-presented and briskly entertaining.

Critics Consensus: Casino Jack's subject matter is enraging, but in the hands of director Alex Gibney, it's also well-presented and briskly entertaining.

Critic Consensus: Casino Jack's subject matter is enraging, but in the hands of director Alex Gibney, it's also well-presented and briskly entertaining.

Casino Jack And The United States Of Money Photos

This portrait of Washington super lobbyist Jack Abramoff -- from his early years as a gung-ho member of the GOP political machine to his final reckoning as a disgraced, imprisoned pariah -- confirms the adage that truth is indeed stranger than fiction. Oscar-winning filmmaker Alex Gibney once again wields the tools of his trade with the skill of a master. Following the ongoing indictments of federal officials and exposing favor trading in our nation's capital, Gibney illuminates the way our politicians' desperate need to get elected -- and the millions of dollars it costs -- may be undermining the basic principles of American democracy.

News & Interviews for Casino Jack And The United States Of Money

View All Casino Jack And The United States Of Money News

Critic Reviews for Casino Jack And The United States Of Money

Auds will feel info-glut over the course of the two-hour-plus film, which is hardly the desirable response for a piece of reporting on the vital issue of the corrupting effect of money in American politics.

The narrative trots all over the globe, including stops for labor exploitation in the Marianas Islands, dealings with Russian mobsters,ripping off Indian tribes in the desert southwest, and jetting to Scotland to golf with impressionable politicians.

That the film is overlong ultimately testifies to its importance, though after a while, the outrageous details start to run together like surreal satire. Except, of course, that it's all true.

Casino Jack is designed as an indictment of a whole culture of influence peddling, a Beltway way of life where a pat on the back often comes with a kickback.

A little more focus could have done the film good.

A filthy toad of a human being whose every wart is revealed in this hard-hitting documentary.

A morose but instructive story about the destructive influence of money--and fanaticism--on American government.

Audience Reviews for Casino Jack And The United States Of Money

"Casino Jack and the United States of Money" is an insightful, yet occasionally frustrating documentary about the rise and fall of Jack Abramoff, superlobbyist, able to sidestep regulations in a single bound but who would eventually be taken down by his own type of kryptonite. A lot of the frustration comes from the movie's first half, detailing Abramoff's ideological origins with campus Republicans. Whereas it might be necessary to say how fond they were of spy pulp novels and Indiana Jones(John Kennedy was also fond of spy novels and look where that got us in Vietnam), too much time is spent on these quirky details with footagle of Tom Delay on "Dancing with the Stars" playing over the end credits. Correct me if I'm wrong but future generations are going to think Abramoff committed worse crimes than casting Dolph Lundgren in a movie. Actually, his crimes really are not that interesting, compared to the ripple effects as the documentary makes an intelligent case for regulation(I think I have read about the labor situation in the Northern Mariana Islands elsewhere...), public funding of elections and continued existence of newspapers as the Washington Post again follows the money. And I do suppose that one can think of Indian casinos as giving money back to an otherwise impoverished people or cynically as revenge for crimes committed previously by the white man. Even with Abramoff going to jail in the end, I do not have a lot of optimism for the system, no matter who is in charge.

A really good documentary showing just how corrupt the U.S. political system is - lobbyist are the legislators and money are the constituents.

Alex Gibney is a masterful documentary filmmaker, having crafted Enron: The Smartest Guys in the Room and the Oscar-winning Taxi to the Dark Side. His latest doc chronicling the rise and fall of corrupt lobbyist Jack Abramoff is insightful, clear-eyed, and entertaining like his other work, but something’s missing here and it’s hard to put my finger on it. Gibney’s doc lacks the fire and outrage of his previous exposes, so Casino Jack doesn’t hold your attention as strong. It focuses closely on Abramoff’s scandals and his influence peddling and gives shrift coverage to bigger issues about our government being for sale to the highest bidder. The lack of attention to a bigger picture hurts the movie’s power. But ultimately I think what makes Casino Jack lacking is that it is missing one very key participant – Abramoff. Gibney interviewed the man several times in prison but Abramoff declined to be involved after pressure from federal prosecutors. By all accounts, Abramoff is a charismatic, larger-than-life figure, whose Reagan era College Republican idealism transforms into greed and out-of-control hubris (Abramoff foolishly wrote every single thought down in e-mail). His absence is noticeable and blunts the storytelling angles the film can take. With Abramoff’s side, there could be much more insight and dirt. Casino Jack is a solid viewing but not up to snuff for Gibney. Wait for the Kevin Spacey film later this year. Nate's Grade: B

Alex Gibney, the incredibly talented documentarian behind ENRON: THE SMARTEST GUYS IN THE ROOM brings his gifts (too much) to the fore in telling of the rise and fall of Jack Abramoff. Lots of information, some of it truly shocking (and some sadly not) is brought to you in many of the same vaudevillian ways as in the former film, but to less effect here. It's a really good documentary, but Gibney's obvious distaste for Mr. Abramoff keeps it from being a great one. I have no pity for Abramoff, but Gibney's clear bias makes it hard to get completely on board; the whole thing plays like a strong, in-depth, tarted up 60 MINUTES segment. Important viewing, absolutely. Required viewing, not so much.

Casino Jack And The United States Of Money Quotes