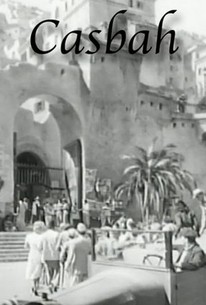 Casbah is a musical remake of the 1938 film Algiers, which was itself a remake of the French film Pepe Le Moko. Tony Martin stars in the old Jean Gabin/Charles Boyer role as Pepe Le Moko, a master thief who lives in the Casbah section of Algiers. A French police inspector (Peter Lorre) would love to capture Pepe, but realizes that as long as the thief remains in the Casbah he is protected by his vast network of criminals. When Pepe falls in love with a beautiful tourist (Marta Toren), he schemes for the first time to leave his little "empire". Betrayed by a former lover (Yvonne De Carlo), Pepe is shot down by the police as he emerges from his sanctuary. Casbah lacks the atmosphere of the earlier non-musical versions of the story, but Tony Martin is reasonably convincing as Pepe Le Moko, even when bursting into song. ~ Hal Erickson, Rovi

Will Lee
as Beggar

Eartha Kitt
as Herself

The older versions were slicker moviemaking but took this likable trash more seriously than it is worth. The new version has just about the right easygoing attitude.

There are no featured reviews for Casbah at this time.