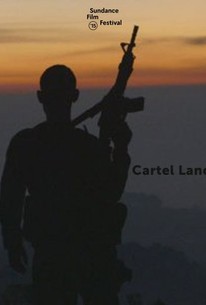 With unprecedented access, CARTEL LAND is a riveting, on-the-ground look at the journeys of two modern-day vigilante groups and their shared enemy - the murderous Mexican drug cartels. In the Mexican state of Michoacán, Dr. Jose Mireles, a small-town physician known as "El Doctor," leads the Autodefensas, a citizen uprising against the violent Knights Templar drug cartel that has wreaked havoc on the region for years. Meanwhile, in Arizona's Altar Valley - a narrow, 52-mile-long desert corridor known as Cocaine Alley - Tim "Nailer" Foley, an American veteran, heads a small paramilitary group called Arizona Border Recon, whose goal is to stop Mexico's drug wars from seeping across our border. Filmmaker Matthew Heineman embeds himself in the heart of darkness as Nailer, El Doctor, and the cartel each vie to bring their own brand of justice to a society where institutions have failed. From executive producer Kathryn Bigelow (THE HURT LOCKER, ZERO DARK THIRTY), CARTEL LAND is a chilling, visceral meditation on the breakdown of order and the blurry line between good and evil. At the 2015 Sundance Film Festival, Heineman received both the Directing Award and Special Jury Award for Cinematography in the U.S. Documentary competition.

Heineman goes through the gates of Hell and comes back empty-handed.

Matthew Heineman's documentary about the Mexican drug wars plays like a real-life version of some grim Sam Peckinpah Western in which violence and corruption have become endemic.

There's no doubting Heineman and his crew's audacity as they venture close to the line of fire, but the commitment to observing dispassionately at all times starts to feel a bit like a cop-out.

There are scenes here unlike anything you've seen. Timely, thoughtful and supremely well-constructed, we'd be stunned if this isn't the doc to beat on Oscar night.

This raw and compelling (if necessarily incomplete) documentary focuses on the recent battles between drug cartels and vigilantes along the Arizona-Mexico border.

Cartel Land vividly presents the gulf between fantasies of vigilante heroism, and how they often harrowingly -- if not bitterly -- play out in reality.

It's really hard to take your eyes off Cartel Land-even when you might need to (re: graphic images of cartel victims).

Raw, brutal, and ambitious, Cartel Land may be a real life story, but its limited scope in truly exploring the ideas it raised left me wanting more.

The run-and-gun style and Heineman's jaw-dropping access will keep your heart pounding through this examination of the current War on Drugs.

An examination of whether vigilante justice - no matter how well-intentioned at the start - is doomed, ultimately, to become just another example of would-be good guys falling prey to the lure of egotism and/or big money.

Reality has Never Been so Riveting A visceral, kinetic, breath-taking, and highly effective documentary, Cartel Land is a film that stands above the rest in its story-telling and authenticity. The embedded filmmaker follows two organic resistance groups to the incredibly violent drug cartels, a group of disgruntled and frustrated militia members on the US side, an an armed civilian uprising on the Mexican side. What results is a film that absolutely mesmerizes the viewer with heart-pounding action, first-person testimony, and undeniable carnage. You can read about Cartel violence or be transported to it with this documentary, a film that is apolitical and only seeks to inform. Excellent 4.5/5 Stars

Could not stop watching this....this is just a fascinating film. Glad that it got nominated for best documentary.

What is most admirable in this excellent film is how Heineman risks his life in the middle of the crossfire with his camera so that he can show us this tragic, appalling and complex situation to which there seems to be no solution and where one step forward means two steps back.