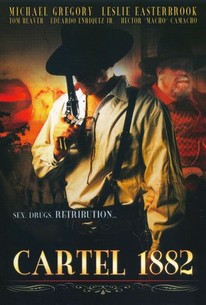 The criminal kingpin behind the most notorious drug empire in the South enlists a dying former detective to capture the transporter who has been skimming from the profits in director Chuck Walker's highly stylized revisionist Western. Horace Longstreet is just the kind of criminal thugs go out of their way to avoid crossing; vengeful, mean, and unforgiving, Longstreet has made a name for himself by dealing in such profitable contraband as peyote, cocoa leaves, and opium. When Longstreet discovers that a carrier known as "The Cat" has been pocketing a bit more than his fair share of funds, he enlists the aid of alcoholic, tuberculosis-stricken former detective in locating and capturing the elusive offender. But like a real cat, this savvy criminal seems to have nine lives, and always manages to remain three steps ahead of his pursuer. Now, as the afflicted former lawman tracks his prey through some of the shadiest opium dens and cathouses in the South, it soon becomes apparent that the hunted has become the hunter.

There are no critic reviews yet for Cartel 1882. Keep checking Rotten Tomatoes for updates!

There are no featured reviews for Cartel 1882 at this time.